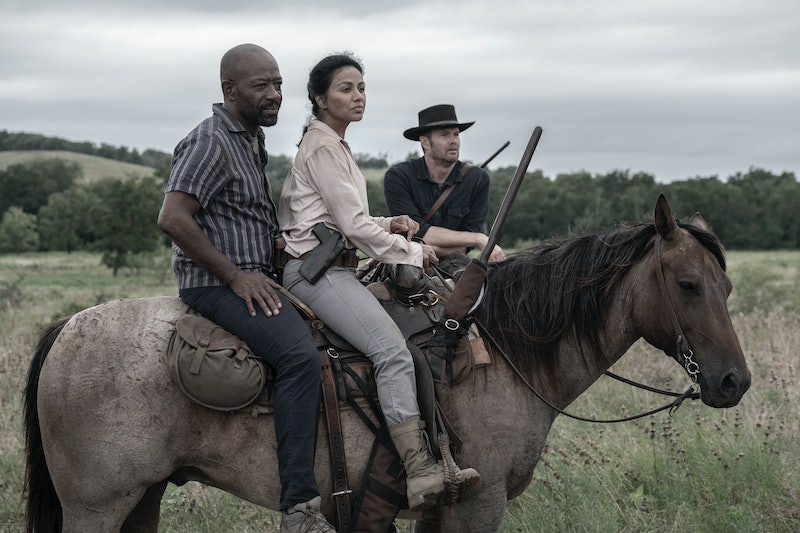 With only one episode left to air in Season 5, fans are already ready wondering when Fear The Walking Dead Season 6 will premiere and continue on with the story. Andrew Chambliss and Ian Goldberg confirmed that the Walking Dead spin-off would indeed return for another year, but we'll have to wait a while longer before the next batch of episodes begins airing.

Unfortunately, no official air date has been set for Fear The Walking Dead Season 6 just yet. It makes sense really — Season 5 began airing on AMC on June 2, but the network didn't confirm the premiere date until the end of March, just about eight weeks before it began. If Season 6 follows the same pattern, it's unlikely that we'll hear any news on the new season before early spring of next year.

Apart from Season 1, AMC has been relatively consistent in terms of the time of year it begins airing new episodes of the series, so we can assume Season 6 will start somewhere between April and June 2020.

There's a lot to look forward to in Fear The Walking Dead's sixth season. As Chambliss revealed at San Diego Comic-Con in July 2019, a "big change" will shake things up just in time for Season 6. It's a shift they've been planning for a long time that's finally coming into fruition.

"Without giving something away, the world is going to expand in a big way and by the time we get to the end of the season, it is really going to shake the entire group to the very core and really change the show in a way that will launch us into season six, in a really big way," he explained.

Goldberg added during the panel that while the lead up to Season 5's "big change" may not seem all that obvious to fans while watching week to week, a second viewing of the episodes would likely make the events to come seem inescapable.

"We really see season five as one big epic story, but as you'll see if you continue to watch, it all builds to an ending which very much sets up what the design of season six is going to be and we've been planning it for a while," he said. "When you go back and watch it all, [what happens] might seem inevitable."

Danger is around every corner on Fear the Walking Dead, and it's a fight for survival on a daily basis for our characters. Could the "big change" showrunners plan to make involve killing off one of the show's biggest stars? That would certainly set the tone for a completely different Season 6. Perhaps we'll see the arrival of yet another new villain, or Morgan's group will make a major breakthrough and experience a victory, however small (and however unlikely).

It's too soon to tell what stories Fear The Walking Dead Season 6 will decide to tell when it airs next year, but no doubt fans will be be waiting with bated breath to find out.