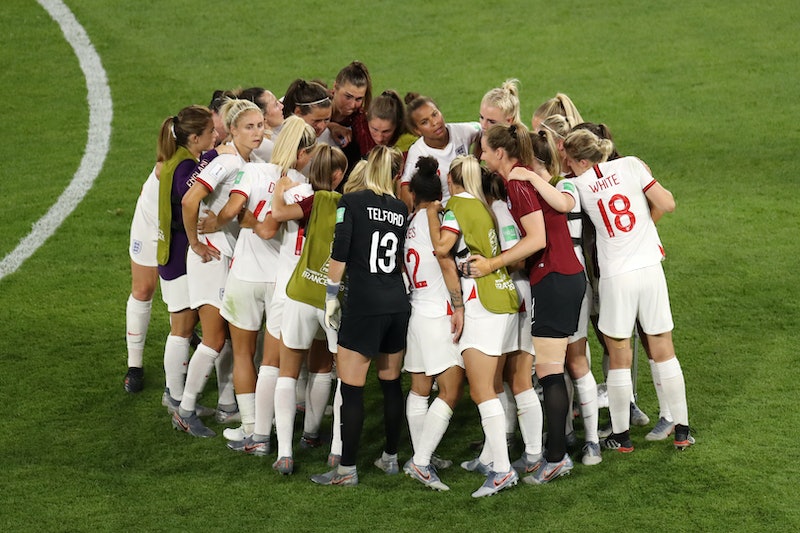 As the Women's World Cup final beckons, one thing is clear: women's football is more popular than ever. But a cycle of abuse and exploitation has long surrounded the sport. So, with little action having been taken, the Association Football Development Programme (AFDP) Global has launched the #FearlessFootball campaign to end harassment in women's football.

According to the BBC, Tuesday's semi-final between England and the U.S. was the UK's most-watched programme of 2019. In fact, this year's tournament has already reached almost double the number of British viewers than the 2015 version. But the celebrations aren't being enjoyed by every women's football team.

In June, the president of Afghanistan's football federation, Keramuudin Karim, was given a lifetime ban from FIFA after being accused of sexually assaulting numerous female players, reports the New York Times. He was also fined a million Swiss francs (just over £800,000). As the Guardian reports, the allegations led to a loss of sponsorship deals, but it also resulted in nine players being kicked off the team. Khalida Popal, a former head of the women’s football department at the AFF, told the newspaper:

"[N]ine players, who are based in Afghanistan, some of our best players, were kicked off the national team, accused of being lesbians ... Because some of them were going to talk to the media. The president [privately] labelled them lesbians to silence them from speaking out about the sexual abuse in Jordan and abuses by coaches. He beat one of the girls with a snooker cue. He beat the player and said she was a lesbian and she was kicked out of the federation."

The manager of Afghanistan's women's football team, Kelly Lindsey, explained to the Telegraph that such treatment was widespread in the sport.

"It’s so much bigger than Afghanistan," she said. "It’s happening in other federations. There are women who want to speak out, but the one thing the Afghanistan team had was enough of us on the outside to have a voice." Lindsey concluded: "Until we find the leadership that can actually hold these sports governing bodies in check, I feel like this will go on."

In 2018, a Women in Football report stated that it had received "a staggering 397.2% overall increase in the number of reports of sex discrimination and harassment incidents presented in the preceding 12 month period."

As well as launching a petition backed by more than 75 prominent figures in both football and human rights, AFDP Global's new campaign has set out a list of principles that any and all football organisations should abide by:

In a statement, AFDP Global founder, Prince Ali Bin Al-Hussein of Jordan, described Karim's lifetime ban and fine as "a first step. However, much more needs to be done to address widespread, systemic abuse and harassment in women’s football. Everyone who cares deeply about the integrity and standing of the women’s game needs to work together.

"The era in world football governance which has allowed coaches, staff, and officials to misuse their power in the treatment of women and girls must end now. The launch of the #FearlessFootball campaign is a landmark moment for the integrity of the game, as we look forward to a brighter future where every girl and woman can play football in safety and with dignity."

Lindsey added: "We need to ensure that the experiences of women and girls in football are listened to at the highest levels. There is power in numbers and, by standing in solidarity with women and girl athletes, we send the strongest possible message that nothing less than equality and dignity will do."