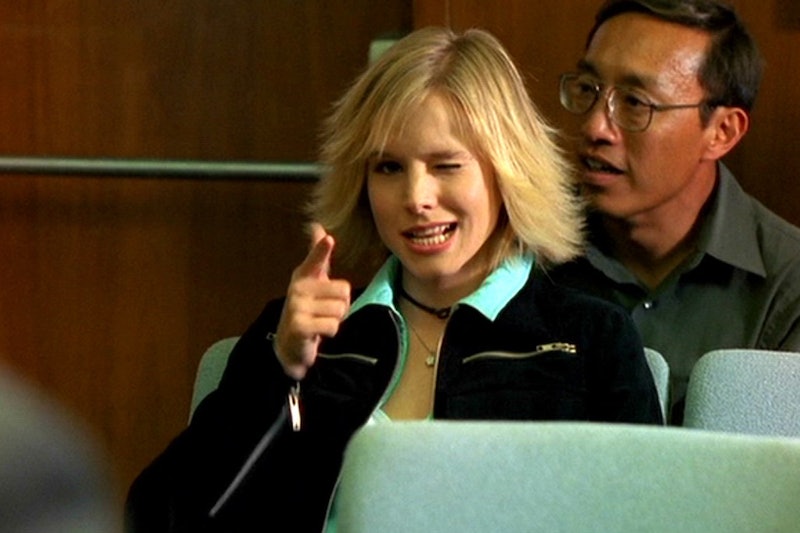 In the ten years since the final episode of the show aired, the dynamic feminism of Veronica Mars has been an evident influence to various shows. You can see Veronica's quippy, sleuthing style in Pretty Little Liars' Hanna Marin. You can spy her wit, charm, and unconventional investigative methods in iZombie's Olivia Moore. And you can witness her ice cold sneer and unstoppable power as a sexual assault survivor in the damning swagger of feminist superhero Jessica Jones. The connections are there, but the shows influence is more important than just the one it imprinted upon TV itself. Veronica Mars was a feminist hero who actively embodied the fight against patriarchal standards and systems in a way that was truly inspiring.

Throughout the show her great conceit was that she was simply an ordinary teenage girl who couldn't possibly be capable of the things that she actually was. Except Veronica was more capable and powerful than those who considered themselves superior to her. She took those aspects of herself that society often judges as being limiting for a person's sense of achievement (such as being young, female, diminutive in size, and of a lower socioeconomic class), and continually used them to her advantage.

In doing so, Veronica always had the last laugh, turning the tables on the people who sought to keep her down — with the very same system they used against her.

During three wonderful seasons of the show Veronica repeatedly took on — and took down — a variety of high ranking men who exploited their respective positions of power for nefarious personal gain. There was the movie star who thought his celebrity status allowed him to get away with enjoying a sexual affair with an underage girl who he would go on to murder. The town mayor who had been using his position of power to sexually abuse young boys. The repeatedly corrupt and inept Neptune police department. Not to mention all of the 09ers who repeatedly thought their masses of wealth could pay them out of just about any misdeed. Veronica took down each and every last one of them.

Taking Veronica at face value, her enemies regularly miscalculated her competency. And in this way I can think of no other female TV character who so perfectly represents the dangers of underestimating women. To the people of Neptune, at least initially, Veronica was little more than the tiny, blonde, and pretty daughter of the tarnished ex-sheriff. She was the angry outcast who all the kids knew better than to hang out with. As a result, barely anybody took her seriously as a threat, because they all assumed she was powerless.

That is, until she managed to stealthily uncover the unknowable about them, either figuring out a lucrative way to use that knowledge against them or to bring them to justice herself. All the while doing so with the greatest, "I told you so" smile on TV, and a smug one-liner that could rival those of any action hero.

Though Veronica might have lacked the physical prowess to qualify her as an actual action hero, she definitely shared the mentality, and tough background of one. In the space of a year, Veronica endures a cluster of unfathomable suffering when she is raped at a party, discovers that her best friend has been murdered, is abandoned by her group of friends, and has her Mom leave home. She senses that there are common threads to all of these events, and instead of allowing the fear or pain of that to submerge her into silence, she instead uses it to strengthen her resolve against the forces that allowed those events to happen.

She experiences the corruption and injustice of her hometown, Neptune, first hand, and instead of bowing down to it, she takes action on it. She's John Wick taking vengeance on the people who killed his damn dog, Charles Bronson in Death Wish, or Sylvester Stallone in Rambo: First Blood. She's out for justice, or at the very least revenge, and she'll tear through the whole damn town until she gets it. What she lacks in might, brawn, or weapons (trusty taser not withstanding), she more than makes up for in intelligence, resourcefulness, and grit.

Whereas feminist TV show characters like Jessica Jones and even Buffy Summers are given physical manifestations of their strength and power, Veronica's strengths never were. And that's truly refreshing.

Instead, Veronica Mars, streaming now on go90, makes the case that heroes come in all shapes and sizes, and with a whole diverse set of capabilities and skills. Veronica proved that you don't always need superpowers, a higher calling, or even violence in order to get even or assert yourself. She proved that you can take your pain and use it as a platform to help others, and yourself. And that, damn guys, women are beyond capable of achieving whatever the hell they want to.