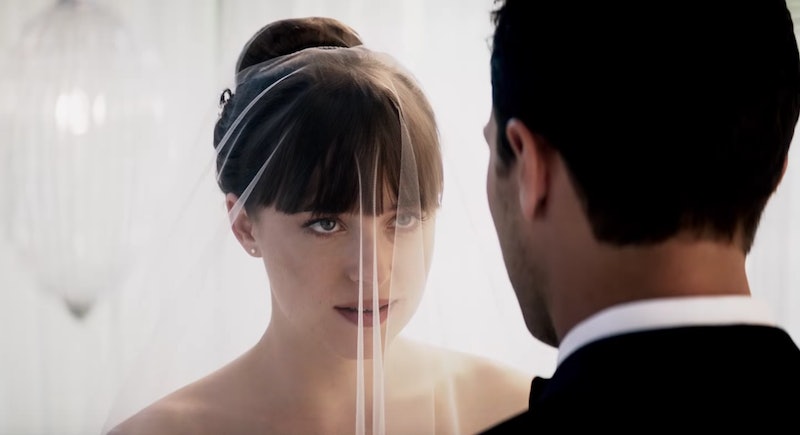 It's almost Valentine's Day, and you know what that means — it's time for another Fifty Shades of Grey movie to come out. Fifty Shades Freed hits theaters on Feb. 9, and it's the last of the series (at least for now). If you're feeling apprehensive, don't worry, because the Fifty Shades Freed soundtrack will make you feel confident that this new movie will be as sexy and entertaining as you hope. Need more convincing? Just listen to the song "For You (Fifty Shades Freed)" by Rita Ora and Liam Payne.

"For You" is Fifty Shades Freed's (first assistant director: Michele Panelli-Venetis) lead single, and it has the perfect upbeat and sexy vibe to get you pumped for another V-Day spent catching up with Ana and Christian. It definitely doesn't hurt that Payne sings things like "skin to skin, breathe me in," which you're encouraged to imagine he's singing to you. While Payne and Ora's duet perfectly sets the mood for the notoriously sexy movie, the rest of the songs from Fifty Shades Freed's soundtrack includes songs by all of your favorite artists like Sia and Hailee Steinfeld. Oh yeah, and Jamie Dornan, as in the Jamie Dornan who plays Christian Grey in the Fifty Shades series. Um, what?

As it turns out, Dornan has many talents aside from acting and seducing, as he can actually sing, and he even once had a band called Sons of Jim. Since the soundtrack doesn't come out until Feb. 9, you won't be able to hear the actor's song just yet, but based on videos of Sons of Jim performing, rest assured that the dude really can sing. Dornan's track is listed on the soundtrack's track list as a bonus song titled "Maybe I'm Amazed." That most likely will be a cover of Paul McCartney's classic, but we won't know for sure until the soundtrack finally comes out.

As mentioned before, the Fifty Shades Freed tracklist includes other big names, and these ones are actually already known for their music. Steinfeld has a song with BloodPop called "Capital Letters" and Julia Michaels sings two tunes, "Heaven" and "Are You." Other names on the track list include Jessie J, Miike Snow, Sia, and Ellie Goulding, who sings a new version of "Love Me Like You Do." It's a stacked list, and if it's anything like the Fifty Shades Darker soundtrack, it might even come out on top of the charts.

As you might remember, the Fifty Shades Darker soundtrack that arrived in February 2017 was a huge hit, and it included the song "I Don't Wanna Live Forever" which was nominated for a 2018 Grammy. According to Billboard, the second Fifty Shades movie's soundtrack debuted at number one on the Billboard 200 last year. Some of the other songs from that chart-topping album were John Legend's "One Man Woman," Sia's "Helium," and Halsey's "Not Afraid Anymore." Say what you will about the movie, but the soundtrack was undeniably pretty fantastic.

The upcoming final installment of the Fifty Shades series promises to bring more drama than ever, which is saying a lot because the movies based on E.L. James' books get pretty wild. From sex dungeons to feuds with Christian Grey's past lovers, the first two Fifty Shades certainly had it all.

In the new movie, Ana and Christian perform one of their riskiest acts yet as a couple, when they get married and move to a fancy new mansion. Though it sounds pretty vanilla for a series boasting its darkness, Ana and Christian might just prove that "settling down" can be kind of unsettling to watch. And of course, always, the new movie will include plenty of risqué sex scenes, which is the whole point, really.