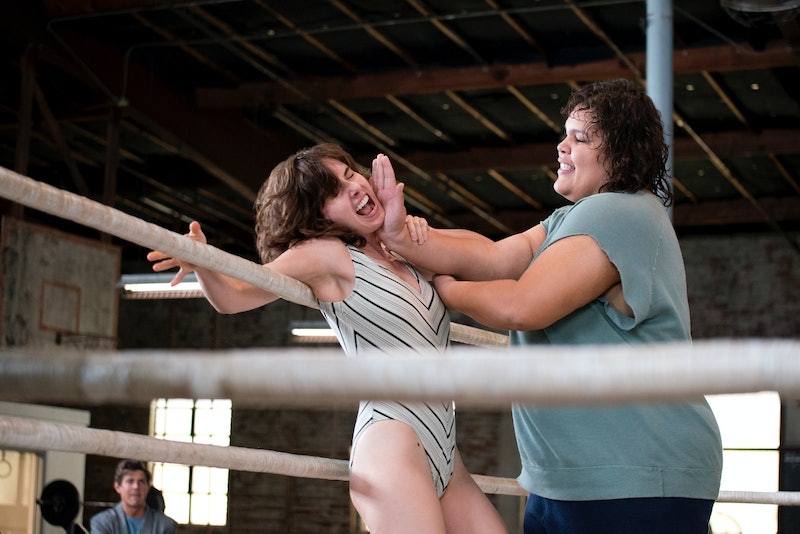 This summer, Orange Is the New Black mastermind Jenji Kohan will roll out her latest Netflix comedy, GLOW. Inspired by the real-life story of wrestling league "Gorgeous Ladies of Wrestling" — which had its own short-lived unscripted series in the '80s — the series is slated to debut on June 23. Its description teases "big hair," "body slams," and plenty of strong female characters, and based on these GLOW first-look photos, the show will follow through.

The series centers around Ruth Wilder (Alison Brie), an out-of-work actress who finds her last shot at fame when she's thrust into the glammed out, spandex-ridden ring of women's wrestling. Alongside a crew of Hollywood misfits, she'll face off with former soap star Debbie Eagan (Betty Gilpin), who left the business to have a baby only to be sucked back into work when her life didn't pan out as she'd planned. At the helm of the team is Sam Sylvia (Marc Maron), a washed-up, B-movie director who must now steer the women toward stardom.

See the first-look photos below.

More like this
“The Door Is Always Open” For Another 'Breaking Bad' Spin-Off, Says AMC Boss
By El Hunt
Emilia Clarke Shares More Details About The New 'Game Of Thrones' Series
By Maxine Harrison
‘Bridgerton’ Stars Nicola Coughlan & Luke Newton Got Polin Fans In A Tizzy
By Stephanie Topacio Long
The Stranger Things 4 Soundtrack Spans Classic Eras & Styles
By Brad Witter
Get Even More From Bustle — Sign Up For The Newsletter