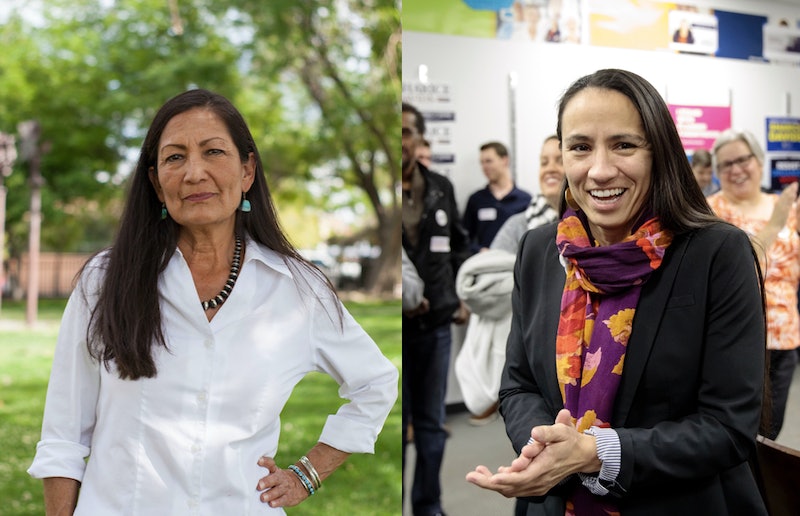 Among the mixed election results on Tuesday night, there were several especially bright spots. Sharice Davids and Deb Haaland won their respective races on Tuesday, becoming the first Native American women elected to Congress in the country's history.

Their victories were long overdue. In May, Davids told Bustle, "Native women are left out of the conversation. And when you think about just size of a group, we make up a small portion of the population. That means that what ends up happening is there’s just nobody in the room who knows anything about Native issues."

In July, Haaland echoed a similar sentiment to NPR. "Somebody has to be the first," she said. "Native women, I mean we've been on the frontlines for a long, long time. Think of all the native women who have fought for treaty rights and fishing rights and all of those things." No stranger to national politics, Haaland helped Barack Obama with his 2008 presidential bid and then later on became the chair of Kansas' Democratic Party.

Now, a little bit about Haaland: The former chair of the New Mexico state Democratic Party is also a member of the Pueblo of Laguna. In September, Haaland told Vox that Native American women had been striving to win representation on the state and federal levels for a long time. "Just because you’re the first Native woman doesn’t mean you get any breaks. ... It’s not something that’s freely given," she said.

Back then, Haaland said that if she was elected to Congress, she would work on "advocating to make sure that Congress recognizes the fact that the United States has a trust responsibility to Indian tribes."

She gave an example of that lack of representation and said that the GOP did not seek any suggestions from indigenous people as far as their tax plan was concerned. "So I hope I can change some of that," Haaland said.

Some may think that it's possibly shortsighted to pin hopes on representation alone, but for Native American women, political representation in Congress would mean that their needs could be heard, understood, and hopefully met by women who share their background.

Issues like domestic violence against Native American women and lack of access to reproductive health care, among others, could receive ample attention and improvement.

Such representation in American politics is also of huge importance to Davids. The candidate told Bustle that she was delighted about the increase in people of color and women running for public office.

"One of the really awesome things about this increase in the diversity of the people who are running for office across the country," Davids said then, "[is that] we’re going to have so many more people participating in those conversations that are not a homogenous group."