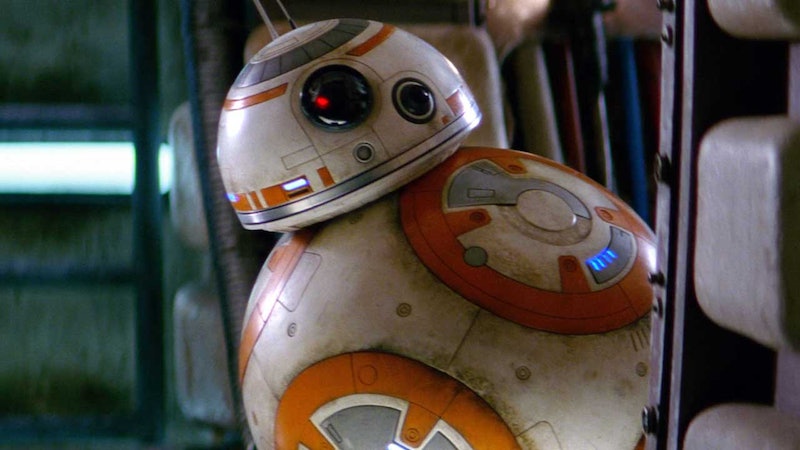 With the next chapter in the Star Wars franchise only four months away, more and more details are starting to emerge about Episode VIII… and the latest spoiler comes from the most unlikely place: a toy. This first photo of BB-8's evil twin BB-9E from The Last Jedi comes courtesy of CNN Money, who unveiled the newest line of interactive robots from toy company Sphero. Alongside their flagship BB-8 model, you'll now also be able to buy scale models of R2-D2 and BB-9E, which can be controlled remotely through an app downloaded to your smartphone.

The lucky engineers at Sphero apparently got to preview some footage from The Last Jedi in order to make their BB-9E as accurate as possible. "We saw some imagery and[learned] how it sounds and behaves in the movie," CEO Paul Berberian told CNN — so you know who to go to for your inside scoop on Episode VIII. CNN also reports that users can give BB-9E any one of nine commands, which include "patrol," "look around," and "run away."

If I'm being honest, any First Order droid that is programmed with a command to literally flee from danger doesn't sound like all that much of a threat.

I'm sure the "E" in BB-9E stands for "evil"… but can something this adorable really be all that bad?

Apparently the new droid will also be available as its own Funko Pop! figurine.

But if you're going to want to add Sphero's interactive BB-9E to your Star Wars collection, you're going to have to move fast; CNN reports that the company has only made a limited amount of the droid. "We're not going to be able to make any more, even if there's a lot of demand for it," Berberian explained, because "typically good characters tend to be more popular than evil ones," and they want to "keep the mystique" of BB-8's evil twin. Sphero's BB-9E will go on sale in stores on Sept. 1, as part of "Force Friday" festivities, so get yours while supplies last!

Of course, fans will know that BB-9E hasn't shown up in any of the Last Jedi promotional material so far, so it remains to be seen how large his role will be in the Force Awakens sequel. But I like to think that Kylo Ren just got so jealous of how awesome Poe Dameron's droid was that he commissioned one of his own. Hopefully BB-8 will be able to communicate with his evil twin and help guide him away from the Dark Side. I'm all here for BB-9E, brooding double-agent and adorable savior of the galaxy.