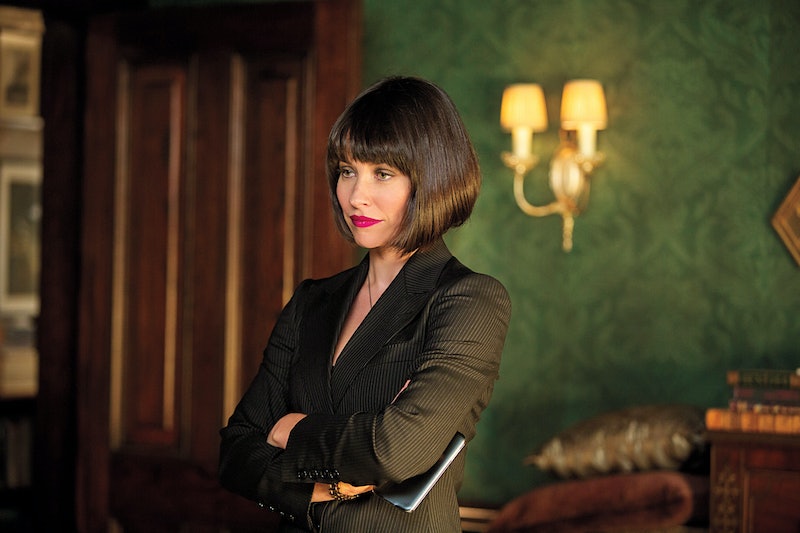 The first Ant-Man film ended with the promise that Hope van Dyne would finally suit up and get a chance to fight alongside the titular male hero in the next film. And now, this first photo of Evangline Lilly in Ant-Man And The Wasp fulfills that promise… though perhaps not quite in the way anybody expected. The picture teases a lot of exciting things for Hope's character moving forward, but it also raises a lot of questions about what she's going to be up to in the upcoming sequel.

The photo was tweeted by the actress in honor of legendary comic book artist and writer Jack Kirby, who — along with Stan Lee — created both Ant-Man and the Wasp back in the 1960s. Although Kirby died in 1994 at the age of 76, Kirby was born exactly 100 years ago, on Aug. 28, 1917. In her post, Lilly thanks Kirby, and states how honored she is to be bringing one of his characters to life on the big screen.

As cool as it is to get a first glimpse at what Hope looks like in full superhero regalia, there are a lot of unknowns, like… What's she doing in a classroom? When did she change her hairstyle? And why does her costume look so different than it did in the Ant-Man mid-credits scene?

Although the focus of most speculation regarding the photo is undoubtedly going to be centered around her snazzy outfit, the biggest change here is definitely Hope's drastic haircut. Gone are the severe angles of her short bob from the first film, replaced by a more relaxed ponytail. With the new 'do, Evangeline Lilly looks less like the Hope moviegoers got to know in 2015's Ant-Man, and more like, well… Evangeline Lilly. Does this perhaps mean that Hope has quit her job as a board member at Pym Technologies? (Not that a ponytail means Hope can't be professional, but this is exactly the kind of visual shorthand movies often use to convey major character changes like a career shift.)

But enough about the hair. Hope's costume is interesting precisely because of how much it doesn't resemble the costume that was glimpsed at the end of the first film. While the basic outline of the torso section is essentially the same, that's about where the comparisons end. The color schemes are different, the shoulder pads are gone, the sleeves have been added, and both the mask and the wings are missing in the pic Lilly shared.

Some of these changes are for the better; the original's shoulder pads were a bit outdated, and sleeves are probably an upgrade over bare flesh when it comes to hand-to-hand combat. But some are for the worse; the new, muted color scheme is much less striking than the original's striking gold accents, reminiscent of when the X-Men films traded in its heroes' trademark yellow-and-blue costumes for bland leather ensembles. It seems weird that Ant-Man would show one costume, indicating that Hope would be wearing it in the sequel, only to have the character show up later in a completely different costume.

So why the change? There are a few possible explanations. First, there's the possibility that the sequel will flashforward a few years, and that Hope will already have been through a few iterations of her superhero getup, and that the one seen in the photo is simply the latest in a long line of outfits. Another is that the costume glimpsed in the mid-credits scene wasn't built by Hank Pym for Hope to wear; perhaps he was simply showing Hope her mother Janet's old costume as a promise that he would build her her own costume. Finally, there's the simplest explanation: that director Peyton Reed and his team just changed their minds about what they wanted Hope's costume to look like between Ant-Man and production on the sequel.

As to where Janet's mask and wings are, and why she's standing in a classroom, audiences will probably have to wait until Ant-Man And The Wasp is released in July 2018 to find out the answers to those questions. Until then, at least they can rest easy knowing that the sequel will be fulfilling its promise to give fans a kickass female superhero to root for.