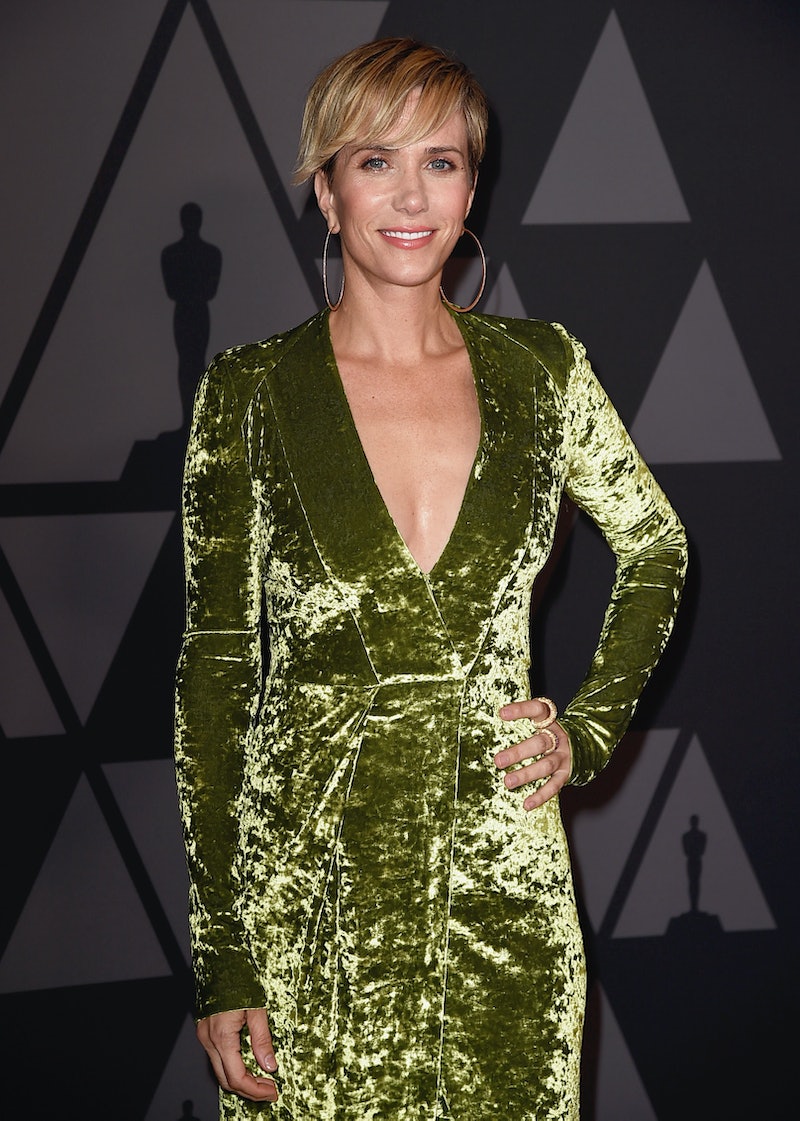 Unfortunately, Wonder Woman's new villain isn't rocking a fanny pack like Chris Pine, but the first photo of Kristen Wiig in Wonder Woman 1984 is still a sight to behold. On June 27, Director Patty Jenkins tweeted a first look at Wiig, who plays Cheetah in the upcoming sequel, but she's not in her super villain costume. No, this photo shows Wiig as Barbara Minerva, the human alter-ego of Cheetah who hasn't yet transitioned in this photo. Don't worry, though, this image may not show Barbara in her evilest form, but it may reveal more than meets the eye about Wiig's WW84 character.

"Enter Barbara Minerva...," Jenkins tweeted on Wednesday, June 27. While it's not yet clear where exactly this shot falls in the film, which will be released on Nov. 1, 2019, it sure looks like it's the first time Wiig's character enters the movie. In the comics, Barbara Minerva is an archaeologist and it appears in this shot that she's visiting a natural history museum. Perhaps, staring at a cheetah? It looks as if this is an important moment to Wiig's character, who's looking totally '80s in her rad red sweatshirt, which may bode well for her Cheetah costume. Yes, to neon and lycra cheetah print.

Despite there being many Cheetahs throughout the Wonder Woman series, — the original Cheetah was first introduced in 1943 — what Jenkins revealed in her tweet is that her Cheetah is actually the third version of the character, which has become Wonder Woman's biggest nemesis.

According to The Hollywood Reporter, Cheetah's first appearance in the Wonder Woman comic was in 1987. Writer Len Wein and artist George Perez cast her as a British archaeologist, who also happened to be an heiress, go figure? She gained her cheetah powers after a trip to an African jungle, but if this photo is to be believed, this Cheetah may gain her powers from a trip to the museum. Maybe Wiig's Cheetah is a museum curator. After all, that's what Diana Prince, a.k.a. Wonder Woman does, giving them an obvious connection.

While Barbara Minerva's not the original Cheetah, she stands out for being the "first to have the literal strength and speed of the jungle cat," according to The Hollywood Reporter. Sure, an invisible lasso is pretty boss, but being a human cheetah is also pretty cool. Unfortunately, though, Cheetah's powers come at a price, namely that her animal side has a habit of taking control of her human mind. If Jenkins does choose to keep this part of Barbara's story, it should be interesting to see Wiig, a physical comedian, take this one.

The thing is, not much is known about Wiig's Cheetah beyond this photo. Back in March, Jenkins announced Wiig's casting in an excited tweet, but not a very detail-filled one. She wrote:

"So excited to confirm the most thrilling news. Yes! It’s true. So incredibly lucky to welcome the sensationally talented Kristen Wiig to our Wonder Woman family. Can't wait to finally work with one of my favorites. And SO excited by what we have planned. #Cheetah!!! @GalGadot."

The fact that Jenkins is excited about Wiig's casting, though, should make the rest of us excited since it's something different for the actor. Sure, she might add a bit more humor to her take on Cheetah, but who isn't intrigued to see her play a bad guy in a comic book blockbuster?

While fans will still have to wait and see what Wiig's Cheetah costume looks like, for now this is a sneaky look at what's to come for the character that will keep fans theorizing until next fall.