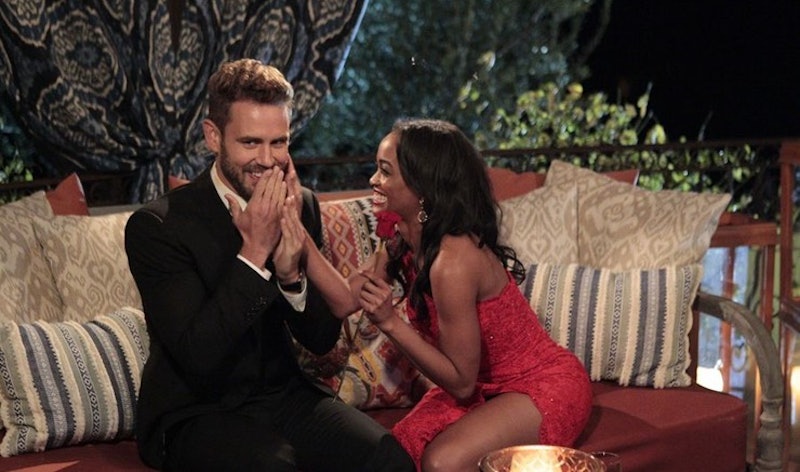 With filming of the new season of The Bachelorette underway, the internet is alight with sneak peeks behind the scenes. Thanks to The Bachelor creator, Mike Fleiss, we've got our first look at the suitors who will be competing for Rachel's affections from May 22 on ABC. On Friday, Fleiss shared a photo captioned, "Dudes..." which, as you can probably guess, featured a room full of smartly dressed, extremely attractive men. And what's most interesting about the shot is that the first photo of Rachel's The Bachelorette cast already looks promising and diverse.

There's been a huge amount of press regarding Rachel's casting, especially as she's making history as the first black lead either show has ever had. It's hard to believe that it took 21 seasons of The Bachelor and 12 of The Bachelorette before a person of color was given the leading role, but it hopefully means that this season will be unforgettable — in a good way. And judging by Fleiss's first look at Rachel's suitors, this season's cast is quite diverse, which will likely have viewers jumping for joy. Finally, The Bachelorette not only has its first black lead, but range of suitors vying for Rachel's affection appears to better reflect America's diversity.

Speaking to The Hollywood Reporter about The Bachelorette, Rachel Lindsay said, "To be the first African-American woman is a beautiful thing." But the history-making role is not without its share of challenges, and Rachel discussed the questions she has already received from members of the public. She told THR,

"Honestly, I don’t want to go into this process with any preconceived notions or any pressures to do something for somebody else. I hate to sound selfish, but it’s my process. It’s my journey in finding love. And whether that person is black, white, red, whatever — it’s my journey. I’m not choosing a man for America, I’m choosing a man for me."

Rachel has made it clear that she takes her role as The Bachelorette seriously, and is truly ready to find love. But this first look at Rachel's suitors shows that the show is simultaneously striving to rectify its previously glaring diversity problem, and seems to have selected a group of potential love interests with that in mind.

In the recent interview with Entertainment Tonight above, Rachel said she wants a cast who "reflects what America looks like." And she said she's "excited" that her season has the chance to do that. Based on Fleiss' photo, this seems like a solid start.

Rachel's season on The Bachelorette begins in May, and America is already excited to follow her journey as she looks for love.