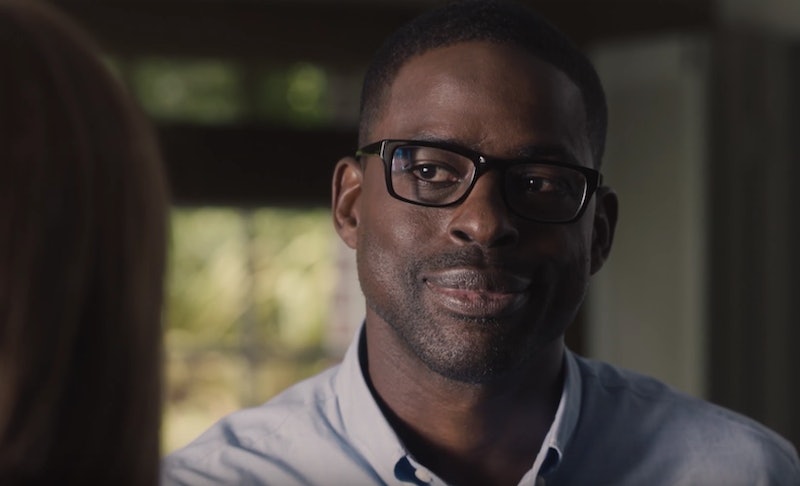 It's been four months since the second season finale of This Is Us aired in mid-March, and fans can hardly handle the wait for Season 3. Fortunately, This Is Us viewers don't have to wait for the regular year-long period before the next season premieres, because This Is Us Season 3 will begin on Sept. 25, 2018. Even though that news broke last month, it's even more real now that the first photo from the This Is Us set for Season 3 just came out. But now the upcoming season is finally social media official, it's not exactly what fans might expect.

The photo came from series creator Dan Fogelman's Twitter, where he posted a picture of the monitor on set, showing Randall (Sterling K. Brown) and Beth (Susan Kelechi Watson) acting out a scene in the kitchen. The most striking feature about the photo is that it looks like the scene being filmed captured an exciting, happy moment. Everyone who watches This Is Us, or even just anyone who's just ever heard about the show, knows that joyful scenes aren't really what the NBC show is best known for.

Fogelman captioned the photo, "First scene up, Season 3 baby!!!" Those three exclamation points — which are fitting for the third season — are each necessary to capture the excitement that every This Is Us fan probably feels seeing a photo of the actors back on set. It's such a treat that the third season of the multi-generational family drama is set to premiere in just a few months, and Twitter users aren't holding back their enthusiasm.

Even though the photo from set that Fogelman shared shows Randall and Beth at what looks like a happy moment — or maybe they're surprised, it's hard to tell — fans of the show on Twitter have already reacted in the most This Is Us way ever: with lots of crying emojis.

One Twitter user, @IHeartChadMM87, even has a countdown to Sept. 25 going. They said, "77 more days until I can’t wait to watch #ThisIsUs season 3 premiere." The same user also had a prediction for Season 3, adding, "I still think and want to know who older Tess, and old Randall will go to see 'her'-Deja?"

The Twitter user making conjectures about "her" is referring to one of the biggest cliffhangers from Season 2. Shockingly, the post-Super Bowl episode of This Is Us provided yet another timeline to the show that already time-hopped between two periods in the Pearson family's lives. During the Mar. 13, episode, the joyous celebration of Kate Pearson (Chrissy Metz) and Toby Damon's (Chris Sullivan) wedding had a somber undercut, when a future timeline was presented. During that 10 year time jump to the future of the "current" timeline, when the wedding took place, audiences were introduced to an aged Randall and an adult Tess (Iantha Richardson).

During scene which left everyone wondering who "her" is, Randall and Tess sat silently across from each other until finally Randall told Tess, “It’s time to go see her." Tess responded, saying, "I’m not ready," and Randall told her, "I’m not either." As you can tell based on Twitter user's @IHeartChadMM87's comment, everyone has a prediction who "her" is. Most people online seem to think that it's either Beth or Annie (Faithe Herman), but with this show, you really never know.

The only thing that you do know is that it probably is going to make you cry — and that's not just because of the fact that the show always prompts an endless flow of tears when it airs. Rather, Chrissy Metz confirmed that "her" doesn't won't be a happy reveal. While talking to Entertainment Weekly, Metz said, "It’s something you’d… nobody… it’s not good... It’s actually very heartbreaking." Yikes.

It's pretty surprising, then, that the first photo released from the set of This Is Us shows Randall looking animated — rather than sullen — while Beth flashes a smile in the background. At least you know that some parts of Season 3 won't make you sob.