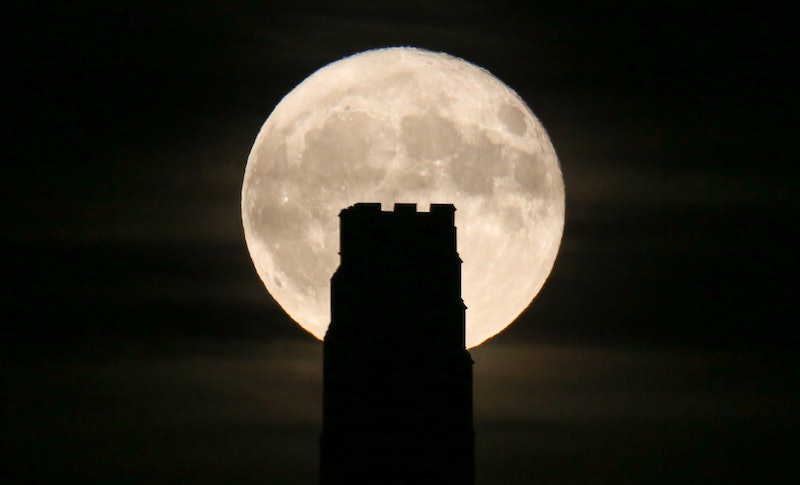 Throughout your life, you've probably heard the phrase "once in a blue moon" used to describe something that doesn't happen very often. While it's a common saying, a blue moon is actually a real thing — and considering one is occurring on Jan. 31, it raises the question, how rare is a blue moon? The start of 2018 is an opportune time to wonder what it really means when a blue moon occurs. And, if you're anything like me, what a blue moon actually is.

While it would be quite a sight, when a blue moon occurs, the moon does not actually turn blue. In fact, the origins of the name have nothing to do with the color: According to NASA, a blue moon was originally referred to as the third full moon in a season that has four full moons, and this version of a blue moon is visible about every two and a half years. In the past 20 years, though, the definition of blue moon has been expanded to also include the second full moon that appears within one calendar month.

So, what causes a blue moon in the first place? It takes approximately 28 days for the moon to rotate around the Earth, and with each movement, the angle at which the sun hits the moon increases or decreases, leading to the phases of the moon. When the Earth is directly between the moon and the sun a full moon occurs. While the moon's cycle is roughly the same length as a calendar month, they are not synced — meaning full moons appear at different times of the year, and sometimes two occur in the same month.

Is A Blue Moon Rare?

Then there are the times where our calendar and the phases of the moon sync up and fit two full moons inside a single month. While it is far from a once in a lifetime event, a blue moon is definitely rare — for some perspective, the last one occurred on July 31, 2015. Additionally, while this two and a half year span between blue moons is quite typical, it's also not always the case: 2018 will see two blue moons, with the second set to occur on Mar. 31, 2018.

Two blue moons happening in the same year, let alone only two months apart, is seriously rare. Thanks to February being only 28 days, that month will see no full moons, while it's surrounding months will each see two. A year with two blue moons won't happen again until 2037.

While a blue moon is a special occurrence on its own, this month's blue moon is taking things one step further as a supermoon. While the term supermoon may sound a bit apocalyptic, the reality is much less scary and way cooler. In 1979, astrologer Richard Nolle is credited as providing the first definition of a supermoon stating that a supermoon occurs when a new or full moon is within 90 percent of it's closest approach to Earth. This means that a full moon would have to occur when the moon is at a maximum of 226,000 miles away from Earth in order to be considered a supermoon.

A supermoon is reason enough to check out the view of Jan. 31's moon — but there's more. On top of this being a blue moon and a supermoon, the day will also include a total lunar eclipse, meaning the moon will appear to have a slightly red tinge to it.

While the end of January is bound to be quite cold, this lunar event is definitely going to be worth popping your head out for.