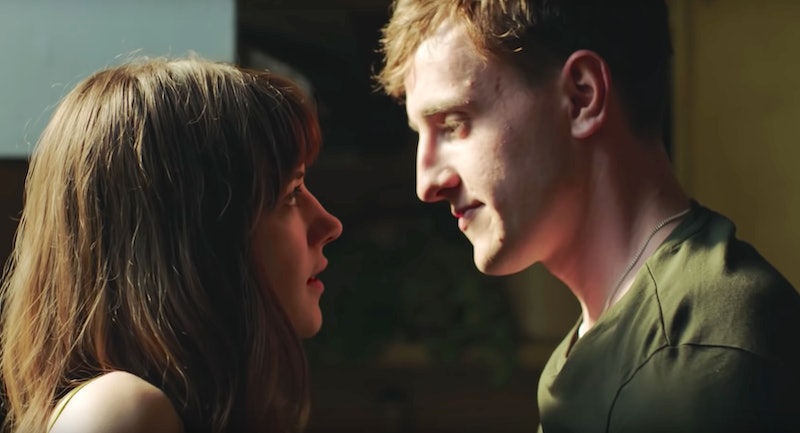 Brace yourselves, Sally Rooney fans: the first look at BBC Three's Normal People is here – and it is seriously sexy. Released on Jan. 17, the trailer is short, but sure to generate ridiculous levels of excitement, as the novel did when it was released in 2018.

Over the course of 50 hot seconds, the teaser features Marianne (played by Cold Feet's Daisy Edgar Jones) leaving a voicemail for Connell (played by Paul Mescal) after they've been reunited following a seemingly lengthy absence. Their chemistry is electrifying, with scenes from the sort-of-couple's "relationship" – from their school days in County Sligo to their university years at Trinity College Dublin and beyond – flashing on the screen as she speaks.

Directed by award-winning Hettie McDonald, and Oscar nominee Lenny Abrahamson of Room fame, the series is set to be just as gripping as the book upon which it is based. Rooney’s second novel shot the Irish writer to fame, earning her (among many other accolades) the Costa Novel Award 2018, the Dylan Thomas Prize in 2019, and spots on the longlists for the Man Booker Prize in 2018 and the Women’s Prize in Fiction 2019.

The show will also mark Rooney’s screenwriting debut. (Alice Birch and Mark O’Rowe helped with the TV adaptation.) Producer Ed Guiney told the Guardian that the best-selling author “was involved in all the early discussions about how many episodes, the format, conversations about actors, as well as reading various versions of the script ... She contributed to them all; it was a full-blooded engagement.”

Also speaking to the news outlet, Abrahamson said he wanted to make “a very strong statement” with Normal People. "The territory is so interesting," he said of the book's storyline. "It’s a positive account of two young people falling in love. It sounds simple but there’s a lot cynicism around that kind of material. It’s a look at intimacy in the 21st century and a portrait of a very tender relationship. It’s radical in a sense."