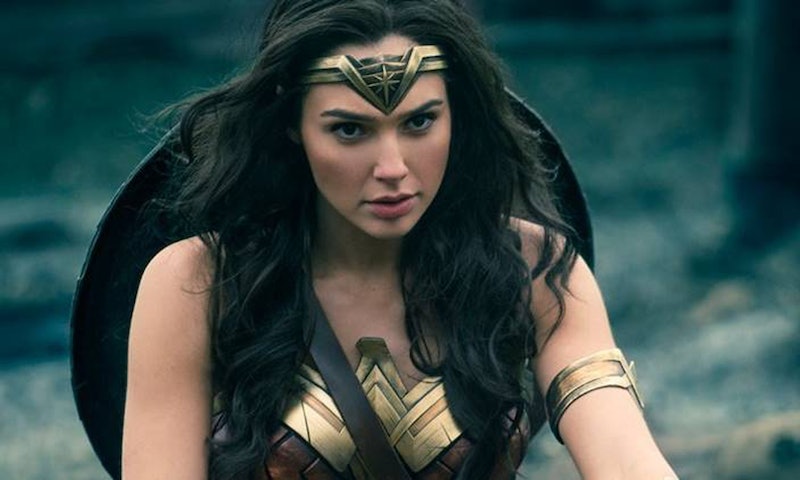 The second photo shows Gadot's Diana Prince standing in front of a stack of technicolor television screens, taking in images of the modern world, including a shot of J.R. Ewing from Dallas.

Steve's appearance comes as a shock, since he was presumed dead after he sacrificed himself in 2017's Wonder Woman, and his plane exploded. While his body was never shown and the audience never actually saw him die, his reappearance begs questions about how he survived and where he's been in the four decades since viewers last saw him.

Jenkins and DC Entertainment President Geoff Johns previously hinted at the title of the follow up and that the action would be set during the Cold War, posting photos of logos on their Twitter accounts that simply read "WW84".

As soon as Jenkins and Gadot posted the photos above, Wonder Woman fans also took to social media to share their excitement for the sequel and for Steve's return.

@iAmBethF wrote, "They released pictures for the next Wonder Woman movie and I am so excited," with a pair of heart-eye emojis and @g4tisss said, can we talk about how the new wonder woman will be in the f**KIN 1980S I AM LIVING THANK YOU GOD".

Jenkins also announced via Twitter in March that Kristin Wiig would be coming aboard as the devious villain Cheetah. She wrote,

"So excited to confirm the most thrilling news. Yes! It’s true. So incredibly lucky to welcome the sensationally talented Kristen Wiig to our Wonder Woman family. Can't wait to finally work with one of my favorites. And SO excited by what we have planned. #Cheetah!!! @GalGadot."

Gadot also took to social media to share her excitment about the casting news, tweeting, "I’m SO excited welcome on board Kristen! This is going to be WONDERful!" And that same month, Variety reported that Narcos star Pedro Pascal had also joined the film, though his character has not yet been revealed.

Upon its release, Wonder Woman became a global smash, raking in $821 million at the box office domestically, and over $5 billion worldwide, according to Variety, and was the first live-action DC film fronted and directed by women.

In June 2017, Jenkins told E! News that she was overwhelmed by the film's success. She said,

"For years when people would say, 'Who would go see a Wonder Woman film?' I always thought, 'Wonder Woman's an amazing thing. I think a lot of people would.' But the way that the has embraced it - seeing it multiple times, and making it No. 1 at the box office, and sending the message that they have - I'm touched and blown away."

Jenkins added that she had been discussing the possibility of directing the film with the studio for 10 years, telling E!, "I had gone in there many, many times. Everybody knew my love of it. Everybody knew I wanted to do it in a very specific way. So, finally, those two things, when they coincided, it was magical, wonderful and perfect."

While little is known about the plot of Wonder Woman 1984, based on the photos Jenkins and Gadot posted, it seems the film will be informed at least in part by the social and political climate of the 1980s, and viewers can look forward to seeing Steve in a pair of Nikes come Novemeber 1, 2019.