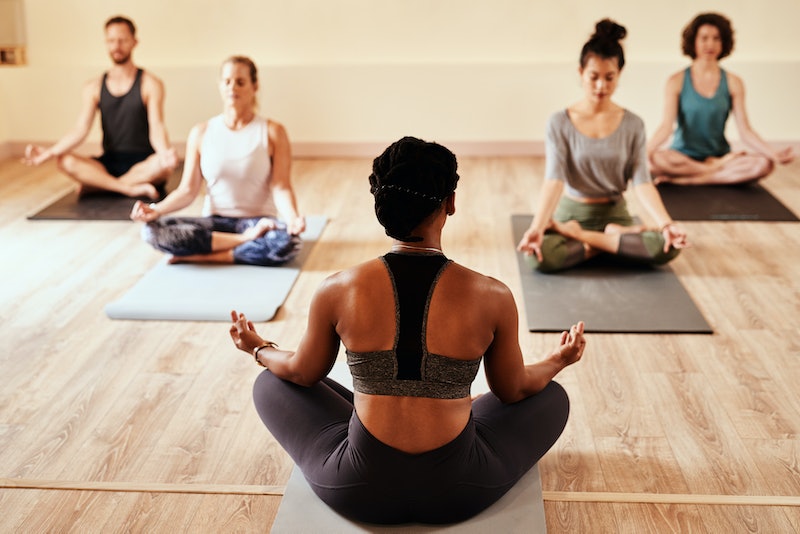 Exercise is all about improving mental and physical wellness, but the fitness industry can be very selective about whose bodies represent "health." Being slim, able-bodied, and white is often privileged as the aspirational fitness ideal. As organizations like CrossFit are finally starting to confront structural racism in light of the Black Lives Matter movement, the workout industry at large needs to pay attention to the inequities it reflects and perpetuates. Making fitness spaces actively anti-racist needs to be a constant and fundamental priority for any company, trainer, or regular-old workout human.

"I can't say I have ever been in a fitness space where I have felt truly affirmed," says an anonymous personal trainer and group fitness instructor who teaches in Chicago. She tells Bustle that she constantly censors herself in gyms and fitness spaces. "I'm always wondering, 'Is today the day I end up dead because I pissed off the wrong white person with what I said?' and it is exhausting."

This exhaustion characterizes the exercise world for so many workout enthusiasts of color. Ilya Parker, a certified personal trainer and founder of fitness service Decolonizing Fitness, says that he brings the identities of being Black, fat, queer, transmasculine, and poor with him into workout spaces. Parker, who uses he and they pronouns, tells Bustle that in order to feel safe in the exercise world, they have to continuously carve out their own workout communities.

"I honestly don’t feel at home in any of [my] identities within fitness or as a trainer," Parker says. "I love fitness, but because my identities were never fully supported, I felt forced to carve a lane so I could show up as my full self while engaging in a practice I love."

Prioritizing Black and brown leadership fosters an environment that celebrates diverse forms of fitness, says the anonymous instructor in Chicago. "I would love to see more Black people in the spaces that train the people who teach the classes," she says, pointing specifically to dark-skinned Black people. "I know there is the thing out there where companies say, 'Well, we are actively recruiting people of color,'" but overall the fitness industry remains overwhelmingly white.

It's important to get critical about who runs gyms, and where, Parker says. In 2019, financial and media company Bloomberg conducted a statistical analysis of gyms across the United States. It found that franchises like CrossFit, Barry's Boot Camp, and Pure Barre are usually located in neighborhoods that are over 80% white. Twelve of 13 other franchises whose gyms were included in the data were also in areas with an average of 70-80% white people.

"You often see anti-Blackness in boutique gyms and fitness spaces in gentrified areas that often promote to and cater to white/thin/able-bodied folks, while doing little to nothing to support the primarily lower-income Black and Brown folks who make up the communities they are seeking to infiltrate," he tells Bustle.

When you're in an environment like the fitness industry where no one looks like you, it might make you think 'I can't do it', but you can.

Creating anti-racist fitness spaces is not just about combating microaggressions, interpersonal racism, donating, or posting with hashtags. Parker says it's also about creating gyms that are accessible at fundamental structural levels. Fitness spaces that are truly invested in anti-racist work must be affordable, physically accessible for people with all kinds of bodies and abilities, and hire diverse staff who speak more than just English. He adds that trainers need to be actively trauma-informed in their practices and embrace multiple modes of teaching and learning, including investing themselves in fat liberation and body-affirming training.

Fitness spaces don't only exist IRL — what and who you see on social media also has a profound impact on how welcome or unwelcome you might feel. "The majority of what I see [online] is the stereotypical spinning population: white, middle-aged, skinny women," says Kim Walker, a spin instructor at the indoor cycling studio franchise Cycle Bar. "That does not make most people feel comfortable, represented, and like they belong."

When you live or work out in spaces that are hostile to your identities, cultivating virtual fitness spaces can be affirming, Parker tells Bustle. If you use YouTube and Instagram to work out (and during the pandemic, who doesn't?), diversify your feed as much as you can. The more people actively seek out BIPOC personal trainers and support BIPOC-owned gyms, both online and IRL, the easier it will be to form community, and from there, structural changes.

"When you're in an environment like the fitness industry where no one looks like you, it might make you think 'I can't do it'," Walker says. "But you can."

More like this
This Psychological Effect Might Be Keeping You From Hitting Your Goals
By Lexi Inks
The Differences Between Jogging Vs. Running
By Carolyn Steber
Here's How Cardio & HIIT Affect Your Body Differently
By Carolyn Steber
The 9 Best Exercises For Piriformis Syndrome Relief
By Carolyn Steber
Get Even More From Bustle — Sign Up For The Newsletter