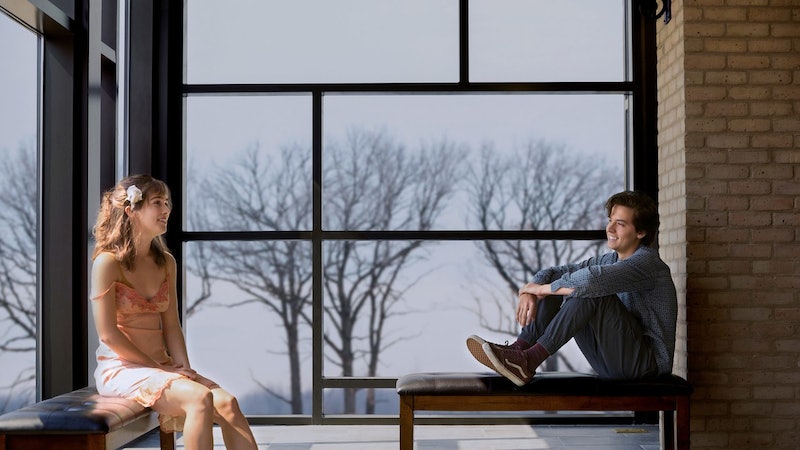 When it comes to romantic dramas, there’s no sub-genre more devastating than love stories that involve one or more characters with a terminal illness. But Five Feet Apart, out Mar. 15, doesn't neatly fall into the "weeper" category. It’s not supposed to be devastating. It’s meant to uplift viewers with a story of how a couple with cystic fibrosis find happiness in themselves and each other. Major spoilers ahead. Instead of ending on a heartbreaking note, the film actually opts for an open-ended conclusion, giving audiences hope for Stella (Haley Lu Richardson) and Will’s (Cole Sprouse) romance. But while director Justin Baldoni wound up choosing that one, multiple endings were shot for Five Feet Apart.

“I think we recorded three or four," Sprouse says, speaking over the phone in early March. "And the ending was the thing, in the post-production process, that I know the director and the editors in the studio had really spent a lot of time talking about. And they had landed upon an interpretive ending, to sort of leave it up to [the audience.] I've had people assume that it works out, assume that it doesn't work out, and I think that services the hope while simultaneously accepting the nature of cystic fibrosis."

Sprouse notes that one of the alternate endings could be classified as a happy one, while the other was more pessimistic. “I’m sure you can fill in the blanks," he adds.

According to Baldoni, there was a test screening that helped him determine which ending to use. And the one that appears in the film was chosen for a very important reason.

“People wanted to know what happens next," he says in a separate call. "And we decided to go with this ending, mostly for me, because I thought it would be really powerful to have Stella, the main character, looking at the audience when she delivered the last few lines."

Those last lines are particularly meaningful, as she tells viewers of the importance of not taking things for granted. "We need that touch from the one we love almost as much as we need air to breathe," she says. "But I never understood the importance of touch. His touch. Until I couldn't have it. So if you're watching this, and you're able, touch him. Touch her. Life's too short to waste a second."

That monologue capped off the film for Baldoni. "Those are such important themes in this film. And it's very rare that your lead character can look at you and kind of deliver the ending," notes the director. "And in this particular situation, the way we created this story and this device, it gave us the opportunity to let the narrator tell us how she felt, and give us a personal lesson based on her journey, and I thought that was really, really powerful. Because at the end of the day, that's what I want the audience to leave with... basically the feeling of what she says at the end of the movie.”

As the movie comes to a close, Stella looks back at the small, meaningful moments that made her realize there’s so much more to living than trying to survive and doing what she’s expected to. Viewers can interpret the ending to mean that, even if she doesn’t end up with Will, the experience of that first love has left her feeling hopeful about the rest of her life, showing how much she’s changed from the beginning. Stella is first introduced as someone who follows a rigorous routine to maintain her health, without having much time to have fun. And once she meets Will, he inspires her to loosen up. Earlier in the film she says, “I’ve been living for my treatments, instead of doing my treatments so I can live," recognizing how she's been holding herself back.

But Baldoni assures that while the message will resonate with viewers who have CF, it's also meant to inspire anyone watching to take setbacks and challenges in stride.

"I hope that an audience will look at this and think of it as a mirror to their own life," explains the director. "What are the themes in their own life that are reflected in this film? Is there a love or relationship in their life that's worth fighting for? Is there a person in their life that they haven't talked to in a while that they need to call? Is there something they're struggling with that they want to quit or give up on but maybe it's worth it. Maybe it's worth fighting for."

More like this
Christina Perri Had No Idea Her 'Twilight' Song Is On YouTube's Top 100 Chart
By Radhika Menon
How Director Quinn Shephard Turned Dylan O’Brien Into A “Viral Weed Blogger”
By Samantha Leach
Angourie Rice Unleashes Her Inner Control Freak
By Jessica Derschowitz
At 14, D'Arcy Carden Was Sneaking Out To Parties & Crying Over Kurt Cobain
By Ivana Rihter
Get Even More From Bustle — Sign Up For The Newsletter