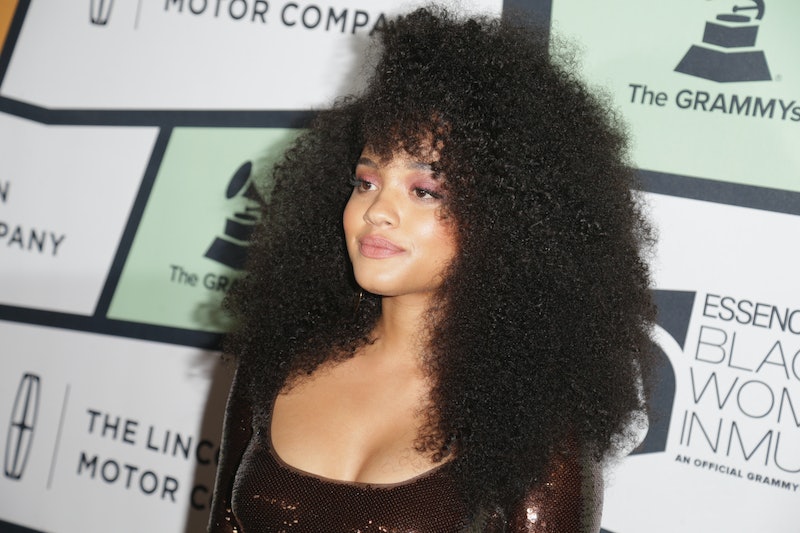 Becoming a badass female lead in the legendary DC Comics world is a triumph, but not one that goes without its hurdles. Kiersey Clemons, who will play Iris West in Warner Brothers' upcoming take on The Flash, is riding the highs and lows the best she can. The fresh-faced 23-year-old rejoices in all she can bring the comic universe with optimism and positivity. That said, she deals with behind-the-scenes drama like directors (plural) dropping out of the project, and the uncertainty of how she'll be received in such an established, beloved franchise. But with a self-assured attitude and kickass sidekick (Ezra Miller, who will play Barry Allen/The Flash), she's more hopeful than anything.

Clemons realizes that joining the DC world means knowing her stuff. "I had to do all my research. I still have so much more research to do," she tells me at Essence's Black Women in Music event. Needless to say, starring opposite Miller in the upcoming blockbuster can be intimidating. "I was a little nervous at first to hear what people had to say about me," she says. Luckily, she's received nothing but positivity from fans. "Everyone’s been really inviting and welcoming in the superhero family. I’m enjoying talking to everyone on Twitter and stuff," Clemons says. But losing director Rick Famuyiwas, who she worked with on Dope, is still an unfortunate setback.

The movie still seeks a director, since the original one Seth Grahame-Smith dropped out as did Famuyiwa due to "creative differences." Clemons is still bummed about what happened, since she grew close with the director, especially since he helped bring her onto the project in the first place. "Rick was one of the main reasons I wanted to do the movie," she told The Hollywood Reporter. "Him not being a part of it is obviously very upsetting to me."

Because Clemons says she "knew his take" on the story and grew comfortable with it, she will continue to hold her own whenever someone comes in to take his place. "Oh, I’m gonna do whatever I want," she jokes. I’ve already been casted, so what I say goes. I was here first."

In all seriousness, she tips her hat to Miller and says she's glad she has him throughout the chaos. "I know I have Ezra, so that makes me feel better," she says. In fact, the actor is one of the reasons Clemons was so game to join the film as his tough partner in crime.

"It’s really important to trust your sidekick. I believed in Ezra more than I believed in any other superhero we’ve seen on screen," she says. "I just think he’s an incredible actor. He’s just dedicated to life, he’s inspiring, and I enjoy spending time with him." I admire her praises of their teamwork, but love that she's ready to bring her own to the franchise as well.

Clemons says her take on Iris will perhaps be different than what audiences have seen of female sidekicks in the past. "[It's] a different take on what it is to be a woman that is working with her man and working together," she explains. Remaining a unit with Miller, and allowing both of them to shine, is important to her. "She’s not uptight and although she’s a journalist, she’s not always shoving it in people’s faces how smart she is. She doesn’t have to prove that she is woman and more, she’s just her," Clemons says.

The experience of playing a journalist also opens her eyes to a different world, but maybe not in the way she would've expected. "How does a journalist dress? Would a journalist have a big bag or tiny bag? What would she record things on? Would she carry a notebook?" Clemons asks. "Those were all things I was trying to figure out so I knew how to use my body in what I would be checking for and doing," she says.

Future Flash director, take note: The strong-willed and prepared Kiersey Clemons may be offering you a pointer or two.