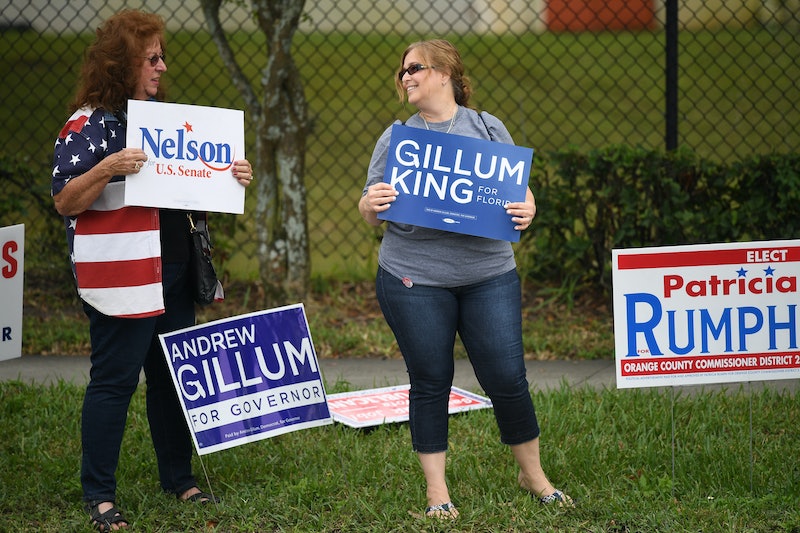 As recently as last weekend, the Florida recounts looked as though they might mirror 2000, when hand recounts continued into December with Al Gore and George W. Bush both vying for the presidency. This year, though, the Florida recount results showed the races for governor and U.S. senator were close but with clear winners. Results released on Sunday handed both races to the Republican candidates.

Outgoing Gov. Rick Scott flipped the U.S. Senate seat for Republicans and beat out incumbent Sen. Bill Nelson by winning 50.05 percent of the vote, Reuters reported. The difference in votes was just 10,033 according to the final numbers that were due to the secretary of state by noon.

Shortly after the recount results were released by state officials, Nelson conceded. Scott announced the concession in a statement, CNN reported. "I just spoke with Senator Bill Nelson, who graciously conceded, and I thanked him for his years of public service," Scott said in the statement provided to CNN.

In the governor's race, Trump ally former Rep. Rick DeSantis prevailed and beat out Tallahassee Mayor Andrew Gillum in the race for governor. Gillum conceded on Saturday; on Thursday the state election officials said that the race was not close enough to conduct a hand recount.

Gillum gave his second concession via a Facebook video on Saturday with his wife, R. Jai Gillum. "This has been the journey of our lives," Gillum said in the video. "Although nobody wanted to be governor more than me, this was not just about an election cycle. This was about creating the kind of change in this state that really allows the voices of everyday people to show up again in our government."

Gillum also called out the state's election systems in his concession. "We're going to everything that we can to make sure that over the coming weeks and over the coming months that we do what we can to perfect our electoral system," Gillum said. "We need to update Florida's elections system and bring it into the 21st century."

Sunday's results were most vital, though, for the Senate race. Following their release, Nelson give a televised statement, saying "things worked out a little differently than [he] had hoped." He also spoke highly of his campaign staff and volunteers. "We may have been outspent in this campaign, but we were never outworked," the senator said.

In his televised statement, Nelson conceded the race, but not the issues. He called on Floridians who voted for him (and those who didn't) to protect the state's natural resources — with a specific warning against offshore drilling.

In addition, Nelson mentioned a large number of issues, from the need to protect Social Security and Medicare to civil rights, women's rights, LGBTQ rights, and voting rights. "There's been a gathering darkness in our politics in recent years," Nelson said before suggesting that civility could be the solution to the country's political impasses.

The recounts themselves had been a source of incivility. Republicans denounced the recounts and accused Democrats of using them to steal the election. "I will not sit idly by while unethical liberals try to steal this election from the people of Florida," Scott said after the election.

Now that Scott — and DeSantis — have won, the accusations are a moot point.