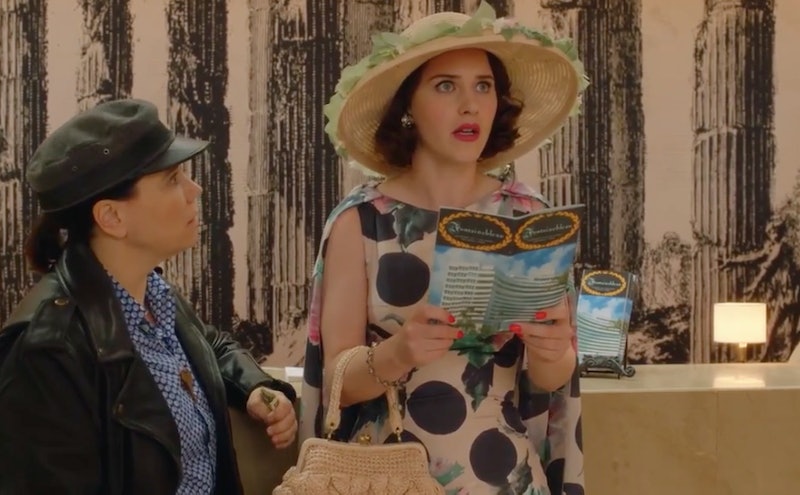 Spoilers ahead for Season 3 of The Marvelous Mrs. Maisel. There's a reason Midge swoons over The Fontainebleau Hotel's grand staircase as soon as she enters the lobby: it's a real hotel that's as luxurious in real life as it looks on the show, and it has quite the reputation. According to the Fontainebleau website, it's "one of the most historically and architecturally significant hotels on Miami Beach."

Hotelier Ben Novack opened the space in 1954, and it soon became known as one of the largest and classiest destinations in South Florida. Positioned with oceanfront views on Millionaire's Row, all of its magnificent features were designed and placed to complement its French period theme — from its 17,000-square-foot lobby and the legendary "Stairway to Nowhere" to its six acres of formal gardens inspired by Versailles.

The Fontainebleau's site notes that during its first 25 years of operation, it was so well-known that it didn't even need any official signage, and when Midge and Susie arrive there in Episode 5, there isn't one in sight. Midge and Shy Baldwin are also, sadly, at the bottom of the totem pole when it comes to the hotel's featured talent. It's welcomed an impressive list of entertainers including Elvis Presley, Bob Hope, Lucille Ball, and Judy Garland, who during their time, attracted so many people that armed guards had to be stationed at the doors.

After closing to guests in 2005 for a two and a half year renovation, the Fontainebleau reopened to even more fanfare, as it hosted the Victoria Secret Fashion show featuring performances from Usher, Mariah Carey, and Robin Thicke. Multiple Hollywood productions have also used it as a film set, including Goldfinger, The Bellboy, Scarface, The Specialist and The Bodyguard.

When Maisel filmed there, set designers restored the hotel's lobby to its original state, and the cast wore vintage hotel uniforms. Throughout the month of December, Fontainebleau guests can enjoy "marvelous cocktails" named after Midge and Susie, get a "marvelous massage" at the spa, and sip a complementary glass of sparkling rosé to commemorate the Season 3 premiere.

Today, a stay at The Fontainebleau comes with a plethora of activities, including world class dining, exclusive spa experiences, and various entertainment. You can reserve a poolside cabana at one of 10 pools, and if you have kids, there's a club for that. A standard weekend room reservation for two adults averages at about $300 per night — unless you have a big ask, like a room full of yellow teddy bears. Then the rate will probably be more.

More like this
A Guide To All Of Zach Shallcross' 'Bachelor' Filming Locations
By Brad Witter
'The Catch' Revisits A Famed Irish Filming Spot From 'The Tudors'
By Darshita Goyal
The Plane Crash In 'Dear Edward' Is Based On A 2010 Tragedy
By Grace Wehniainen
'That '90s Show' Is Officially Coming Back For Season 2
By Gretchen Smail and Grace Wehniainen
Get Even More From Bustle — Sign Up For The Newsletter
From hair trends to relationship advice, our daily newsletter has everything you need to sound like a person who’s on TikTok, even if you aren’t.