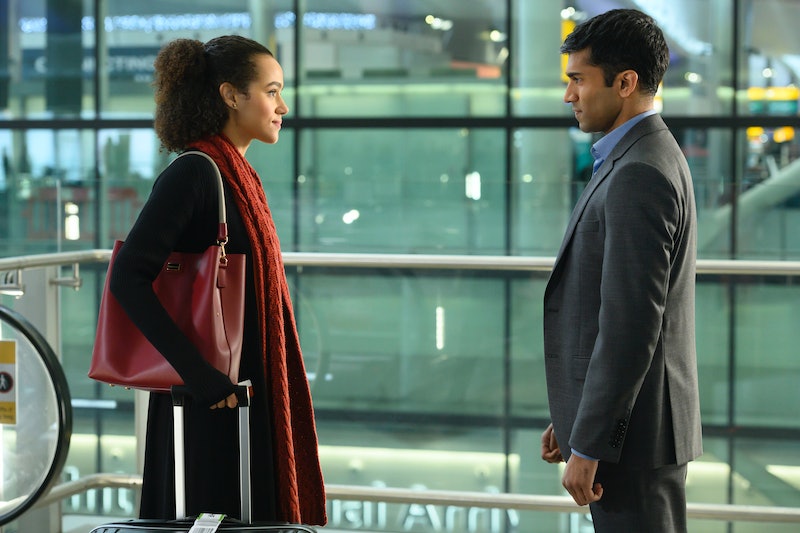 Spoilers ahead for the Four Weddings and a Funeral movie and TV show. Anyone who loves the original film knows that the Four Weddings and a Funeral TV show has big dress shoes to fill. Based on the 1994 British rom-com, the Hulu series spans ten episodes — four of which premiere Wednesday, July 31 — and follows an American named Maya (Game of Thrones' Nathalie Emmanuel) and a Pakistani-British man named Kash (British actor Nikesh Patel) who have a meet-cute at the airport, only to discover Kash is dating Maya's BFF.

The original film was written by Richard Curtis, who went on to pen rom-com classics like Notting Hill, Bridget Jones's Diary, and Love Actually, among others, and who is credited on the 2019 series as an executive producer. The movie was a critical success and introduced American audiences to the charmingly unassuming Hugh Grant, who starred opposite Andie MacDowell. Mindy Kaling and Matt Warburton (who previously worked together on Kaling's shows The Mindy Project and Champions) adapted the story for Hulu, and while it obviously has a much longer run-time, more developed characters, and an entirely new cast, it's worth breaking down both the key similarities and major differences.

In the Richard Curtis film, Charles (Hugh Grant) and Scarlett (Charlotte Coleman) sleep through their alarms and are consequently late for Wedding No. 1. As a result, the roommates let out a steady stream of F-bombs as they rush out the door. The Hulu series opens with the same expletive, but this time, Maya wakes up at her married boyfriend's apartment, only to discover that his wife is en route home. The protagonist is forced to clear out ASAP, and has a number of four-letter responses to the sticky situation.

As mentioned, Patel and Emmanuel play Kash and Maya, who find themselves trying to stave off their initial chemistry after realizing Kash is dating Maya's best friend. The original film never revealed what its characters did for a living (we only knew that Carrie used to work at Vogue), but here, the leads are much more fleshed out: Kash is an investment banker who secretly dreams of being an actor, while Maya is a speech writer for an American senator.

The Group of Friends

Whereas British misfits like Tom (James Fleet), Matthew (John Hannah), Gareth (Simon Callow), Fiona (Kristin Scott Thomas), and Scarlett (Charlotte Coleman) were featured in the movie, the TV show's friend group is considerably more straight-laced than the lovable weirdos of the original — not to mention the fact that they're primarily American.

The early episodes explain that they all studied abroad in London during college and decided to collectively move to the UK after graduation. Craig (Brandon Mychal Smith) is an investment banker at the same company as Kash, Duffy (John Reynolds) teaches Latin, and Ainsley (Rebecca Rittenhouse) owns a home decor shop, which is financed entirely by her wealthy parents. They all certainly have their quirks, but they can't hold a candle to Scarlett with her cropped, flaming red hair, Gareth and his love of experimental cooking and bizarre dancing, or the O.G. group's aversion to marriage as an institution.

It became clear about halfway through the original Four Weddings and a Funeral that Fiona was hopelessly — and unrequitedly — in love with Charles. She even confessed as much. And while the two never got together, it seems like Duffy has more of a chance with Maya, whom he's been pining after for the past decade. In the closing shots of Episode 4, he finally tells her how he feels, and she returns the sentiment with a kiss. Of course, there are several more episodes in the series, so there aren't wedding bells just yet for the potentially happy couple — if at all. Speaking of which...

The '94 film was structured as a series of vignettes, with each wedding acting as a set-up for the next. Wedding No. 1 featured Angus and Laura on their happy day, while the second ceremony was Bernard and Lydia's, who'd hit it off at the first wedding. Much to Charles's chagrin, Wedding No. 3 was Carrie's and Hamish's, while the fourth ceremony was his own. But instead of marrying Carrie, with whom he'd been having an on-again, off-again relationship throughout the film, he was gearing up to marry his ex-girlfriend, Henrietta (Anna Chancellor). Of course, he was unable to go through with it.

As for the Hulu series, there's only been one set of nuptials so far, which went just as badly as Charles' wedding to Henrietta, aka Duck Face, in the movie. Kash second-guesses his decision to marry Ainsley, leaving her devastated and embarrassed at the altar.

In the movie, Michael's partner Gareth (Simon Callow) has a heart attack and dies at Carrie's wedding reception. Here, Gemma's (Zoe Boyle) husband, Quentin, has a brain aneurysm and dies peacefully in his sleep. The ensuing funeral pays tribute to the Chelsea-loving, ABBA-singing, whiskey-guzzling man that he was, with the whole cathedral chanting, "Arsenal sucks!"

It will be interesting to see what other parallels Four Weddings and a Funeral will draw in the proceeding episodes, or if it will diverge from its source material entirely.

More like this
Everything To Know About The Long-Awaited ‘Community’ Movie
By Stephanie Topacio Long
What’s New On Netflix: Ana De Armas’ 'Blonde' & A Nick Kroll Special
By Arya Roshanian
What’s New On Netflix: Meet 'The Real Bling Ring'
By Arya Roshanian
Here’s Everything Coming To & Leaving Netflix In October
By Jake Viswanath
Get Even More From Bustle — Sign Up For The Newsletter