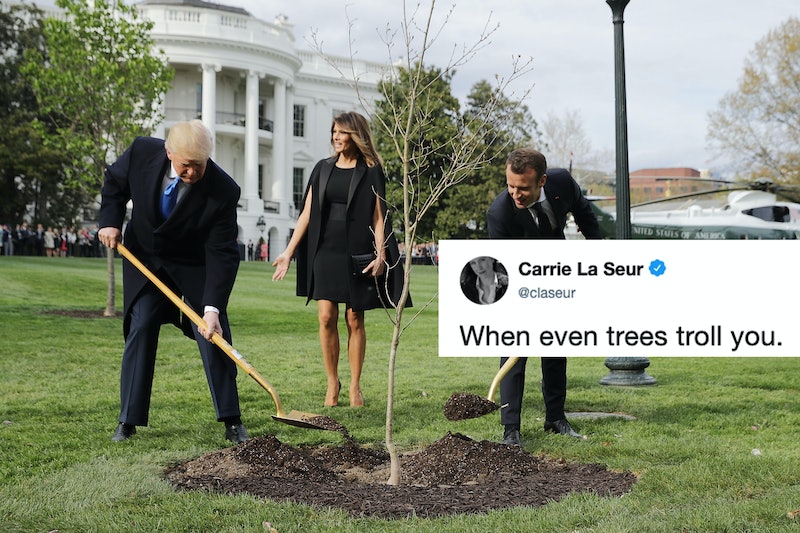 For months, the unlikely "bromance" between President Donald Trump and French President Emmanuel Macron has appeared to have unraveled with the two leaders repeatedly exchanging public barbs. Now, in what is perhaps a great moment of irony, the "friendship tree" planted by Trump and Macron has died. An oak sapling gifted to Trump by Macron and planted by the two at the White House in 2018 was reported dead last week by French newspaper Le Monde.

In a tweet posted during his April visit to the White House, Macron had said the oak tree would serve as "a reminder at the White House of these ties that bind us." It seems to fit then, that as Trump and Macron's relationship hit began to fade in the latter half of 2018, so too did the tree meant to symbolize their friendship.

The tree was reportedly uprooted and placed in quarantine shortly after Trump and Macron had planted it in a ceremony attended by First Ladies Melania Trump and Brigitte Macron, according to The Guardian. At the time, then-French Ambassador to the U.S. Gérard Araud claimed it was "mandatory for any living organism imported into America" to be placed in quarantine, the paper reported. He said the tree would be replanted at the White House.

But the little oak sapling never returned to the White House. According to The Guardian, a diplomatic source confirmed to Agence France-Presse the tree had died in quarantine.

Of course, the tree Macron gifted Trump wasn't just any old oak. According to The Telegraph, it was brought over from Belleau Wood, a forest in the north of France where nearly 2,000 American soldiers died in battle during World War I.

Trump and Macron's relationship began to show signs of wear in November, when Trump took to Twitter just before visiting France to say he found Macron's suggestion for a European military "very insulting." He suggested Europe "should first pay its fair share of NATO, which the U.S. subsidizes greatly!" Macron then used Trump's visit to condemned nationalism as "a betrayal of patriotism," according to Axios. A few days later, Trump returned to Twitter to claim Macron's speech was the leader's attempt to divert attention to what Trump called Macron's "very low approval rating."

"He was just trying to get onto another subject," Trump tweeted. "By the way, there is no country more Nationalist than France, very proud people-and rightfully so!"

According to the Associated Press, the U.S. president has also used the months long anti-government yellow vest protests happening in Paris as a means of mocking his French counterpart. The news outlet, reported Trump attempted to suggest Macron's stance on climate change was behind the protests.

On Monday, a number of folks were quick to point out the irony behind the tree's reported death. "We're one hallucinatory peyote sequence away from life being a particularly heavy-handed Oliver Stone movie," Scott Tobias tweeted of the incident. The Daily Beast's Jamie Ross surmised the tree's death "may be the greatest act of political satire ever performed by a plant."