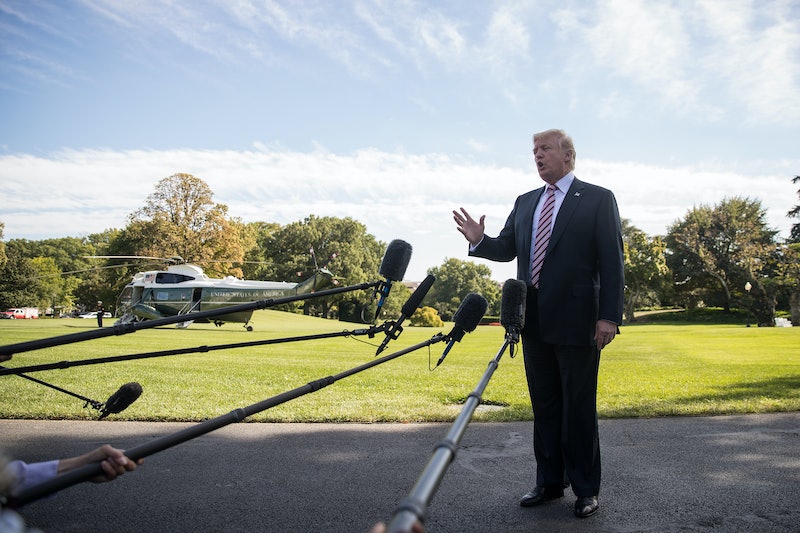 The deadliest mass shooting in modern American history happened in Las Vegas on Sunday night, and now the president has addressed the situation from the White House. Now, you can read the transcript of Trump's remarks on the Las Vegas attack or watch the video of his speech.

The White House announced early Monday morning that the President had been briefed on the attack, and Trump himself tweeted a response to the shooting shortly thereafter. "My warmest condolences and sympathies to the victims and families of the terrible Las Vegas shooting. God bless you!" he wrote. This speech, then, marks his first time addressing a mass shooting in office. Obama had to do so 14 times, a number that we can only hope Trump or any other future president will never again reach.

This heartbreaking attack, in which more than 50 people died and more than 400 were hurt, is a mass shooting on a scale that the country has never witnessed before. The Orlando mass shooting in 2016 at the Pulse gay nightclub, the previous deadliest attack ever, killed 49 people and left another 58 injured. This attack, in which a single gunman fired a machine gun into a crowd of 22,000 people at a country music festival, was an act of violence that the country had simply never before experienced.

Thank you. My fellow Americans, we are joined together today in sadness, shock, and grief. Last night, a gunman opened fire on a large crowd, at a country music concert in Las Vegas, Nevada. He brutally murdered more than 50 people and wounded hundreds more. It was an act of pure evil.

The FBI and the Department of Homeland Security are working closely with local authorities to assist with the investigation and they will provide updates as to the investigation and how it develops. I want to thank the Las Vegas Metropolitan Police Department and all of the first responders for all of their courageous efforts and for helping to save the lives of so many. The speed with which they acted is miraculous, and prevented further loss of life. To have found the shooter so quickly after the first shots were fired is something for which we will always be thankful and grateful. It shows what true professionalism is all about.

Hundreds of our fellow citizens are now mourning the sudden loss of a loved one. A parent, a child, a brother or sister. We cannot fathom their pain, we cannot imagine their loss. To the families of the victims, we are praying for you, and we are here for you, and we ask God to help see you through this very dark period.

Scripture teaches us the lord is close to the brokenhearted and saves those who are crushed in spirit. We seek comfort in those words, for we know that God lives in the hearts of those who grieve. To the wounded who are now recovering in hospitals, we are praying for your full and speedy recovery, and pledge to you our support from this day forward. In memory of the fallen, I have directed that our great flag be flown at half staff. I will be visiting Las Vegas on Wednesday to meet with law enforcement, first responders, and the families of the victims.

In moments of tragedy and horror, America comes together as one, and it always has. We call upon the bonds that unite us — our faith, our family, and our shared values. We call upon the bonds of citizenship, the ties of community, and the comfort of our common humanity. Our unity cannot be shattered by evil, our bonds cannot be broken by violence, and though we feel such great anger at the senseless murder of our fellow citizens, it is our love that defines us today and always will, forever.

In times such as these, I know we are searching for some kind of meaning in the chaos, some kind of light in the darkness. The answers do not come easy. But we can take solace knowing that even the darkest space can be brightened by a single light, and even the most terrible despair can be illuminated by a single ray of hope.

Melania and I are praying for every American who has been hurt, wounded, or lost the ones they love so dearly in this terrible, terrible attack. We pray for the entire nation to find unity and peace, and we pray for the day when evil is banished and the innocent are safe from hatred, and from fear. May God bless the souls of the lives that are lost. May God give us the grace of healing, and may God provide the grieving families with strength to carry on. Thank you. God Bless America. Thank you.

These remarks will now go down in history as part of this very sad day.