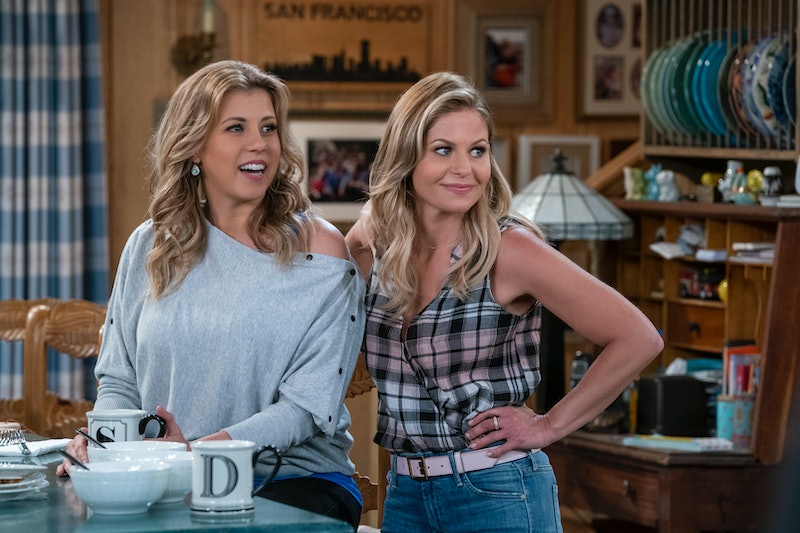 Everywhere you look there's new content coming out on Netflix on a weekly basis, and now that Tanner/Fuller family can officially add themselves to that lineup. After months and months of not knowing when the final handful of episodes will be released, Netflix has finally revealed that the Fuller House Season 5, Part 2 premiere date will take place on Tuesday, June 2, to bring this beloved family's story to a conclusion once and for all.

Back in January 2019, the streaming platform confirmed that Fuller House would return for a Season 5, but that it would be the show's swan song, dubbing it as the "Farewell Season." Like Season 4, the fifth installment was divided into two parts, with the first wave of nine episodes debuting on Dec. 6, leaving the back nine episodes for a later date, which is now only a few months away. But while this farewell will feel brand new for fans, the cast and crew already said their goodbyes to the series months ago when filming wrapped back in November.

"This couch. This show. This family," Jodie Sweetin, who plays Stephanie Tanner on both the original and spinoff series, captioned an Instagram post at the time, though the rest of the cast paid tribute to the show in their own unique ways on social media.

But as sad as everyone may be to see the show come to an end (again), Candace Cameron Bure, who plays DJ, promises that the finale will provide a satisfying conclusion that won't disappoint fans. "I'm very happy with the ending of the show, and I do think the fans are going to love it," she told Life & Style. "It really ties up all the storylines as to where everyone will be. ... It's kind of the ending that we didn't get on Full House. It's a really great last episode, but get the tissues."

Bob Saget, who portrays beloved patriarch and cleaning aficionado Danny Tanner, echoed that sentiment during an interview with Us Weekly, revealing that the final episodes will be a “really nice goodbye” and give viewers a sense of closure.

So cue the cheesy, sentimental background music and prepare yourselves for one more whirlwind ride of laughter, love, and tears. We always knew this day was coming, but now with an official premiere date in sight, it'll be here way too soon.