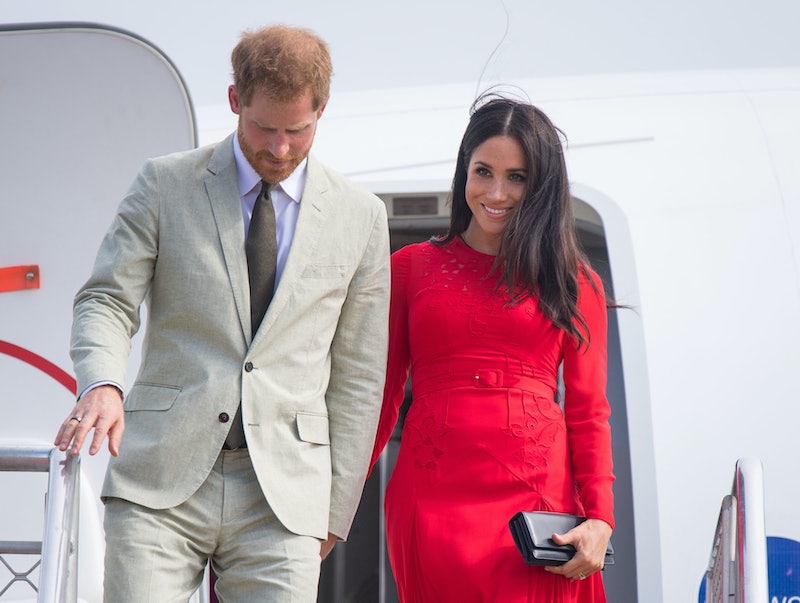 So Duchesses make mistakes. That's why you're here on this page reading this, because the Duchess of Sussex, aka Meghan Markle, left a label in a dress. She made a mistake. And, despite the fact that most of us make mistakes big and small every day, because she's a member of the royal family and a woman this is somehow worthy of headline news.

I mean just imagine it for a moment, imagine if every slip up you made when you left the house was broadcast by the world's media. That every time you forgot to lint roll your black trousers before work, every time you forgot to wipe that last bit of toothpaste from the edge of your gob, every time you forgot to pick a bit of salad out of your teeth. Imagine everyone got to know about it. From your mum to your partner, to your dog. That people zoomed in on pictures of it, and commentators said vague things about your composure, your poise, your suitability for your job. You'd feel pretty rubbish wouldn't you?

So why is there an expectation that Markle, a human being, should be immune to this stuff? That the criticism should just slide off her as if she were made of Teflon.

The woman is is mere months into a total career change, she's adjusting to living in a new country, having a whole new family, being newly married, and now also to being pregnant. Now if that isn't a buffet's worth of stuff on her plate, then what is? On top of that (you thought I was done?) she's currently on her first official royal tour — which if you've seen the episodes of The Crown that detail the Queen's experience on the same Commonwealth trip back in 1954, you'll know is hardly a holiday.

There have been back-to-back engagements at which Markle has shown every sign that she's adapting to royal life like a total pro, even ducking out to attend events when she's supposed to be resting. She's also staying true to herself by committing to support and speak up for causes that empower women. Becoming part of an institution that's as stuffy and full of weird archaic traditions as the royal family without losing a sense of who you are is a challenge in itself. And yet all everyone wants to talk about is a label. A label that you could barely even see.

It's ironic that while Markle is exercising her power as a royal to help make the world fairer for women, label-gate shows just how far there is still left go in the way women in the public eye are treated. The scrutiny royal women are subject to is the same scrutiny that all women are subject to, just taken to an extreme. If you think of the word Princess what does it conjure up? I'm guessing it's a Disneyfied image of perfection, right? Fairytales have taught us that if a Princess is anything, it's pristine. She doesn't make awkward blunders. She isn't too big, too loud, or too difficult. After all, it's Cinderella's ugly sisters whose ungainly feet wouldn't fit into her dainty glass slipper.

The lot of royal women has improved over the past few decades. Even the fact that Prince Harry's marrying an American divorcée was welcomed by his family, when previously it might have seen him excommunicated, not to mention a woman of colour, shows that the royal family is creaking towards something like modernity. And yet, and yet, the women within it are still subject to the most unforgiving expectations of perfection. Just look at Kate Middleton mere hours after giving birth to any of her three children, stood on the steps of the Lindo Wing with perfectly blow-dried hair and a flawless face of makeup, in heels. Royal women aren't allowed to be scruffy, uncomfortable, unpolished, or imperfect.

But maybe every once in a while it would be worth remembering that no matter how put-together they may appear during their royal engagements, royal women are just that — women. And when the lens of public scrutiny is directed towards them so harshly, it moves the needle of the standard of acceptable womanhood that bit closer to totally unattainable for everyone else. None of us live in a vacuum, and the scrutiny on Meghan Markle and other women in the public eye, the laser-like focus on their every minor mishap, sends out a message that belies the reality of womanhood — the messy marvellousness of which has little to do with being able to maintain a mask of perfect femininity (whatever that is) at all times.

More like this
'The Parent Trap's Elizabeth James Was Basically Princess Diana & These Looks Prove It
By Orla Pentelow and Claire Fox
How To Shop Your Favourite Celebrities’ Closets On Depop
By Darshita Goyal
Harry Styles’ Red Carpet Looks Have One Thing In Common
By El Hunt
Dr. Martens’ New Collab Reimagines A DM Classic
By Frances Stewart
Get The Very Best Of Bustle/UK