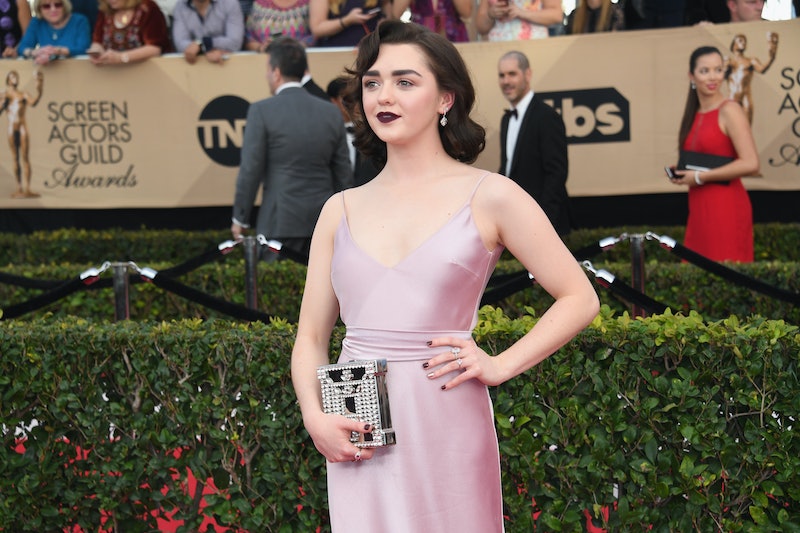 The 2017 SAG Awards features awards that celebrates ensemble casts. So of course several members of the cast of Game of Thrones turned up at the 2017 SAG Awards, since that is essentially the epitome of an ensemble cast that is populated by plenty of fashionable actors. Yes, I couldn't wait to see what Sophie Turner and Maisie Williams, who shared an adorable moment at the 2017 Golden Globes when Turner assisted Williams with the train of her sleeveless, lemon yellow gown while walking the red carpet, wore. Those two were the epitome of #CoWorkerGoals and #FriendshipGoals that night. But what about this evening at the SAGs? I was actually feeling Gwendoline Christie's outfit the most, but more on that in a sec.

Let's recap who from GoT wore what, shall we, staring with Williams? The actor crushed it with a high contrast look. She paired deep, dark, and precisely painted berry lips and brunette and glam, Old Hollywood waves with a silky, spaghetti strap, pale pink dress with a scoop neck that had a boho chic vibe. The column-shaped dress was deceptively simple and it was perfect for her.

Williams also carried quite a statement clutch, which was another "BAM!" contrast the simple lines of her frock.

I adore the contrast of dark and light with dramatic and soft. Those brows, though.

Sophie Turner wore a tomato red gown with a major slit, showing the kind of leg that reminded me of Angelina Jolie at the Oscars in 2012.

Gwendoline Christie brought it with the jumpsuit trend, opting for a roomy, sequined Vivienne Westwood ensemble with a sash and open top.