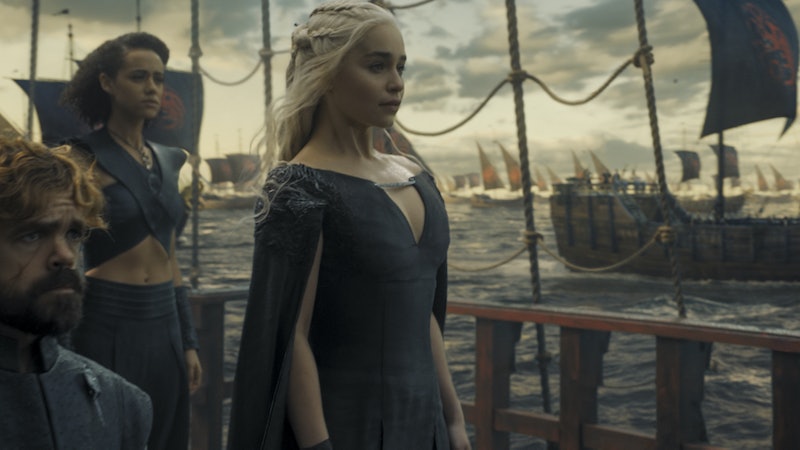 Strap on your snow boots and warm Night's Watch-esque furs because winter is officially coming (in the summer?). On March 9, 2017 the official premiere date of Game of Thrones Season 7 was announced via Facebook Live on the HBO series official page. I am, personally, still reeling. I may never recover. Because while July 16, 2017 feels so far away it also feels alarmingly close. Time flies fast, even when you are waiting passionately and patiently for a continuation of the GoT saga.

We already had to wait for the official date of the premiere, so this wait for a season will be a piece of cake. Shortly after 2 p.m., Facebook Live viewers were prompted, "DRACARYS Type FIRE in the comments to reveal the #GoTS7 premiere date." They were presented with the image a giant block of ice sitting in a candle-lit room on a dais. Off-screen someone (hopefully trained experts) with what may or may not have been a flame-throwers blasted the ice. Meanwhile, GoT actors like Gwendoline Christie and Nikolaj Coster-Waldau popped up next to the image urging fans to keep commenting and tweeting the magic words (fire and Dracarys). For about an hour— with a few technical difficulties sprinkled in during which the live-feed completely stopped — fans sat, glued to their devices, waiting for the a-cursed ice to melt.

Finally, a different kind of flame, green like the series' mythical and magical civilization-decimating Wildfire, joined the already present sparks. And just like that, our long-awaited date was revealed. July 16, 2017. Doesn't that have a great ring to it?

Immediately after the date was revealed, a teaser premiered that will push your heart straight to the pit of your tummy. In the teaser, a camera moves dramatically around statue versions of the House Sigils over a black background — the Lannister Lion, Targaryen Dragon, Stark Wolf, the Mormont Bear, etc. — as different favorite quotes from the series that relate to House tension echo. The whole teaser is a symbolic reminder of all the crazy House-squabbling that has led us to this season. An example of this symbolism becomes apparent when Wildfire shoots up from the Tyrell Sigil just as we hear Qyburn proclaiming, "Cersei of the House Lannister, First of Her Name, Queen of the Andals and the First Men, Protector of the Seven Kingdoms."

The teaser ends with a White Walker eye, which is a helpful reminder that while the Houses feud, a greater danger looms.

After the dramatic teaser, the only person any of us would ever want to see after patiently holding on only to find out about another long few months of holding on popped up on the screen, Ser Davos Seaworth (AKA his actual name, Liam Cunningham). Cunningham claims he can "personally assure" that Season 7 "will be worth the wait." We can always trust the Onion Knight, right?

Teaser aside, the good news is we finally have a premiere date to put in our "Hotties of GoT" calendars. After that ice block situation, these few months are nothing.