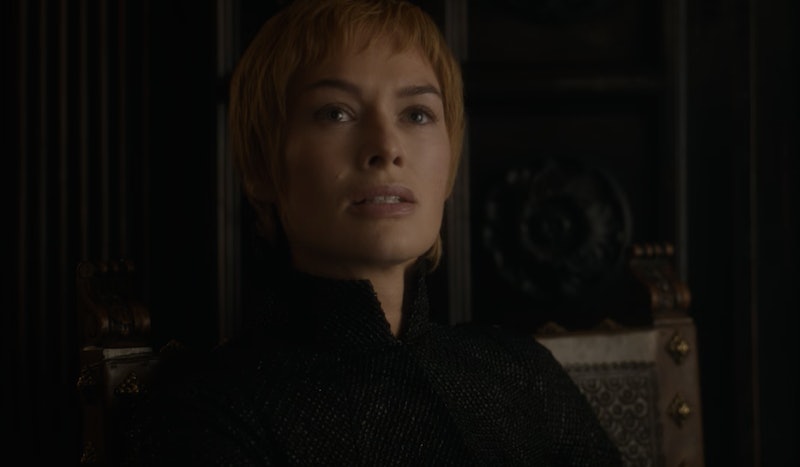 I hope you didn't have anything important planned for today, because the Game of Thrones Season 7 trailer is out. And about time, too. Season 6 finished airing almost a year ago, and fans have been going crazy with the lack of information since then. You can't just push back the release date of one of the most-anticipated seasons ever by a matter of months and expect us to sit quietly. But finally, finally, a Game of Thrones Season 7 trailer dropped, giving us so much more than that "Long Walk" promo from what seems like forever ago. As usual when it comes to trailers for this show, this full one was worth the wait.

Unless you're a Lannister. I mean, in that case, the trailer should have you shaking in your boots hoping Season 7 never comes. Cersei opens the clip by noting that she has enemies in every direction: north, south, east, and west. Forces are pressing in on all sides, and the the last three members of the once-mightly Lannister clan — "the only ones who count" — are in grave danger.

We see Jon Snow, Arya Stark, Daenerys Targaryen, and Littlefinger preparing for war alongside all who serve them. Each has his or her sights set on the Iron Throne, and she who sits atop it, as they gather their forces.

The trailer then launches into scene after scene of warfare and bloodshed as each individual faction fights its way through Westeros. In fact, we never even see the Night's King or any hint of the White Walkers, because there's so much ground to cover in the battles of the living. The only indication that there's more beyond these mortal clashes is the last line of the trailer: "The great war is here."

That line is spoken by Jon Snow, and it implies that these aren't even the most important of the show's battles. The epic showdown between good and evil, light and dark, is still to come; GoT's Season 7 may only show us who prevails on the side of the living. Based on this preview alone, things aren't looking good for Cersei Lannister. But it's an incredible amount of plot to cram into seven episodes, and it's really anybody's game.