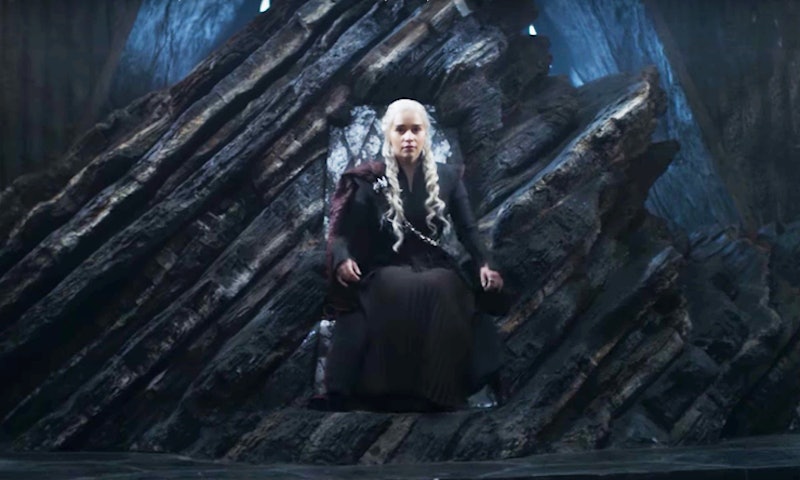 Are you sitting down? If you're not, you will be soon since a Game Of Thrones Season 7 trailer is here… and it is glorious. No, the 90-second promo still doesn't contain any actual footage from the upcoming penultimate season of the HBO show, but it does feature the next best thing: an epic music video of Jon Snow, Daenerys Targaryen, and Cersei Lannister all strutting into their throne rooms and taking several seats — all to the tune of the 1989 song "Sit Down" by Manchester rock band James.

But before any of them can get too cozy, Cersei takes a nice leisurely exhale… and her breath turns into frost in the cold air. That's right, winter has officially arrived. Then the shot zooms out into the eye of a White Walker, and the theme of Season 7 is clear: the petty game of thrones between our main characters won't mean as much any more once the Night King arrives in Westeros. Will our trio of heroes (and anti-heroes) band together in order to fight the impending invasion? Or will the White Walkers and the army of wights find a Seven Kingdoms that are bitterly divided, and thus even easier to conquer?

The most intriguing part of the teaser is Dany's location. Obviously, we know that Jon is moping through the halls of Winterfell, and Cersei is owning the Red Keep like it's her own personal catwalk. But where the heck is Daenerys? Last we saw her, she was sailing across the Narrow Sea towards the Seven Kingdoms… and she seems to have arrived in some castle we've never seen before, given the awesome new set the crew appears to have built for Season 7.

It's almost certain that this new throne room is on Dragonstone, the original stronghold of the Targaryens after their conquest of Westeros, which has been inhabited by the Baratheons ever since they overthrew the dragonlords during Robert's Rebellion. (It's where we first met Stannis way back in Season 2, although we never saw the throne room back then.) If this is Dragonstone, that makes perfect sense; it's a wonderfully strategic place from which to launch an invasion of the continent, situated as it is in the sea just outside of King's Landing.

We'll have to keep waiting to see some actual scenes from Season 7, but, for now, this epic promo of the King in the North, the Queen of the Iron Throne, and the Rightful Queen of Westeros will have to tide us over. And what a delicious appetizer it is. With the Game Of Thrones Season 7 premiere less than four months away, even more tantalizing teasers and glorious promos will surely be on their way soon.