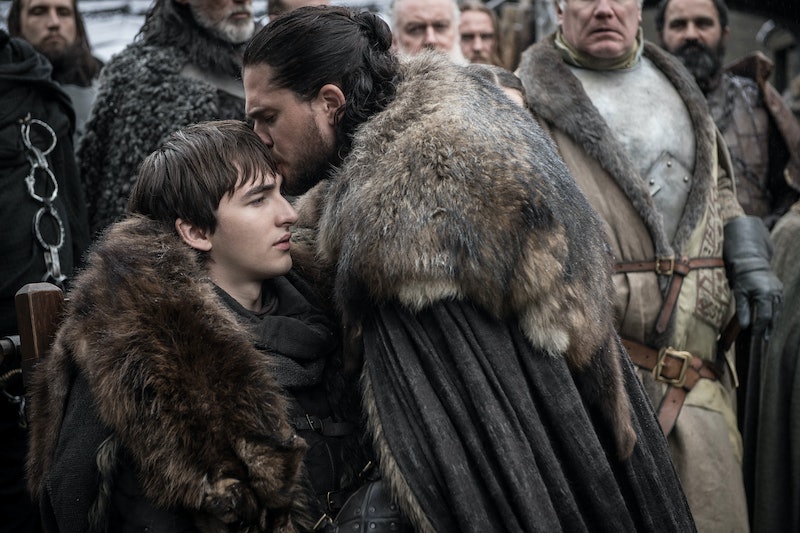 Spoilers for Game of Thrones Season 8 ahead. Any fan of Game of Thrones who is feeling particularly nostalgic about the end of this saga got a dragonglass dagger right to the heart in Sunday's new episode. The GoT Season 8 premiere referenced the pilot in so many ways, it truly took us back to 2011.

Fans already caught on to this when the Season 8 trailer was released. The way Sansa greets Daenerys Targaryen by saying "Winterfell is yours, your grace" is not indicative of her giving her home away to a foreign Queen, it's a traditional greeting — and the same one that Ned Stark gave to Robert Baratheon in the very first episode.

Several other parallels and Easter Eggs to the pilot are sprinkled throughout the episode. Since both episodes take place primarily in Winterfell, lots of scenes utilize the same location, like the Weirwood tree and the underground crypts. Some references are smaller than others. Jon & Arya's reunion recreates that highly giffable hug from the pilot. Multiple naked women climb onto Bronn, the way multiple women climb onto Tyrion in the pilot as well.

There are also references to events and characters in other seasons — the crossbow that killed Tywin Lannister, for example. There was even an Ed Sheerin callback that you may have missed! The way Daenerys unknowingly referenced Ygritte and Jon Snow's cave tryst should definitely have 'shippers worried about their future. Speaking of 'shipping, we'll get to that Gendry and Arya scene in a bit.

As for specific references to "Winter is Coming" in "Winterfell," here are the ones that truly took fans back to where it all began.

The way Little Lord Ned Umber clambered through Winterfell, literally running late to greet a visiting royal party, mirrored Arya Stark in the pilot. The way Ned climbed a tree to get a better view was a nod to Bran's pilot exploits, as well. This time, Arya was already in line, ready to take stock of every arrival. Bran was, well, you know. Bran-ing.

Fun fact: one of the first people Arya sees, in both the pilot and the Season 8 premiere, is the Hound. Obviously, her feelings towards him have changed a bit.

This theme is instantly recognizable from the pilot, and it made a grandiose return as Jon and Dany rode into Winterfell, to be greeted by House Stark the way Eddard and Catelyn gathered their family to greet King Robert and his family.

There are other, smaller parallels in this sequence. The Khaleesi compliments Sansa's beauty, much like Cersei does. Ned immediately asks for Arya, and Jon does the same when he greets Sansa and Bran.

"I have a son. You have a daughter. We'll join our houses."

Sure, Robert Baratheon was talking about Joffrey and Sansa in the pilot. To say that didn't work out would be the understatement of a Westerosi winter. Luckily, there are other sons and daughters of House Baratheon and House Stark, and they're flirting up a storm of swords.

The weird symbol made out of body parts and Lord Umber's wight didn't actually come out of nowhere. The Game of Thrones pilot began with a group from the Night's Watch (check) finding a glyph made from dead bodies (check) courtesy of the White Walkers (check) and a wight child pinned up (check) and ready to scare the Lord of Light out of us.

"The Things I Do For Love"

But wait, there's more! Not only did the Season 8 premiere end its episode with a hat tip to the first ever scene, it then added a kicker reference to the pilot's cliffhanger. As you may remember, Jaime pushed Bran out of a window in that very first episode, and hasn't seen him since. Guess which dramatic Three-Eyed Raven decided to set his wheelchair at the gates and make sure Jaime saw him the second he rolled into Winterfell. Jaime also has long hair, like he did in the first season. That one might not be intentional, but just saying.

Expect more meaningful callbacks as the door on Game of Thrones closes. This truly is the end, and a show like this knows how to pay homage to its roots.