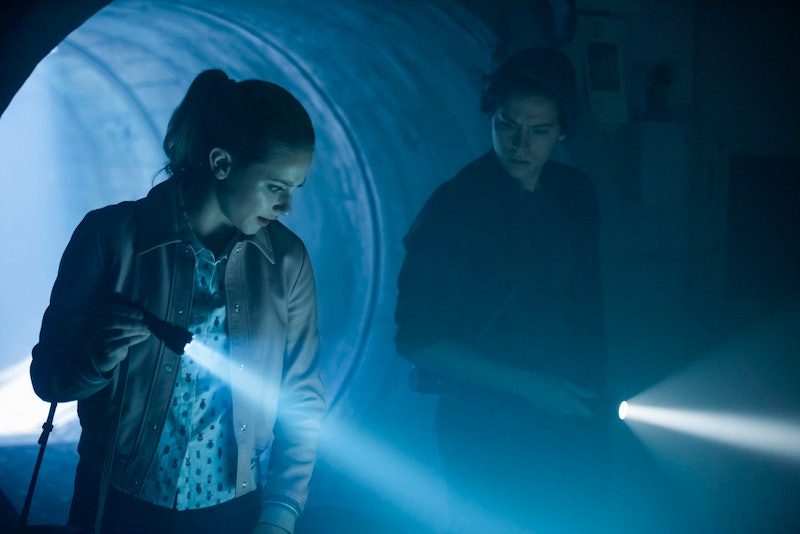 The Gargoyle King is easily the most dangerous thing to hit Riverdale — especially, as it turns out, because Griffins and Gargoyles seems to understand the town better than any of its inhabitants. Nobody knows where it or the game came from, how long it has been around, who's behind it, or what its connection is to all of them. At the end of this week's episode, however, Jughead encounters Riverdale's Gargoyle King in the woods — so hopefully answers are coming soon.

All the world's a game, at least according to Jughead's theory. His involvement in Griffins and Gargoyles is concerning, but not quite as scary as it looked when Betty discovered him playing maniacally in Dilton's bunker at the end of last week's episode. Ever the storyteller and investigator, he discovered that the game seems to be a metaphor for the various entities in town. Eldirvare, the magical fictional world in the game, is an anagram for Riverdale. "It's all connected," he says, "it's all a big narrative that's still being written and made."

Jughead wants to become a game master in order to catch the Gargoyle King, the ultimate game master — and, lo and behold, the quest he designs bears a striking resemblance to the escape plan that the gang devises to break Archie out of juvenile detention. He even doesn't know the end of the quest, due to a last minute change he made, that seems to directly revolve around Archie's fate.

The Warden was also a player with a quest of his own, and seemed to worship the King like some kind of god or devil. "My soul belongs to no mere mortal, Andrews," he tells Archie, surreptitiously pouring wine into a chalice. "The judgment of all men belongs to he who resides in the Kingdom alone, but he's watching us. He's always watching."

Both Jughead and the Warden's quests referred to Archie as the "red paladin," and apparently other juvi inmates were playing. Archie was branded with one of the Gargoyle King's mysterious symbols. Joaquin was promised that he would ascend if he betrayed Archie. It seems that the Warden was tasked with killing Archie, and he took his own blue-lipped life when he failed.

So what's the endgame here? What does the Gargoyle King actually want? Is this Big Bad after something specific, or is he just trying to spread chaos? Half of the deaths at his hands seem to be accidental, the other half split yet again between "worthy" subjects and failures. The King has created a cult with no sense of community.

One of the most likely suspects is Hiram Lodge, as he provided the drugs at the Midnight Club's ascension party. He is connected to both the school and Leopold and Loeb's detention center, and he likely ordered the hit on Archie. That just begs the question, why now, and why in general? Hiram is in the right place at the right time, but it still doesn't add up. There's also Penelope and Daryl, the two game masters from back in the day.

Ethel said that the Gargoyle King had a gospel to spread, and that Jughead was worthy of being that heralding harbinger. Now that Jughead has encountered the imposing creature a second time, maybe he'll learn what that gospel is all about? Any clue about what the Gargoyle King wants or why he's terrorizing Riverdale at this point would be welcome.