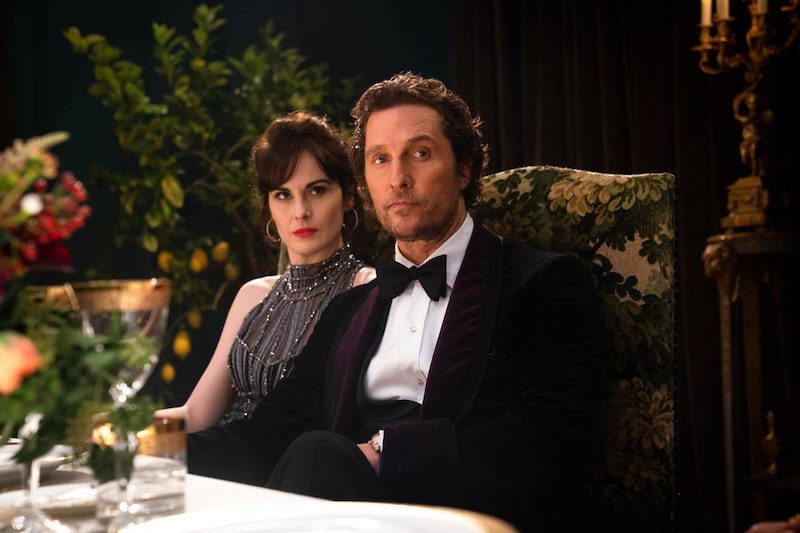 Director and writer Guy Ritchie has been taking some fantastical journeys in film lately. He directed last year's live-action remake of Disney's Aladdin, which starred Will Smith in the role of the Genie. Before that, he took a trip to the magical realm of mystical legends with King Arthur: Legend of the Sword. But with The Gentlemen, opening Jan. 24, Ritchie is returning to the type of film that made him famous. As a crime thriller in the same vein as Snatch or Lock, Stock, and Two Smoking Barrels, The Gentlemen is a modern crime story based in the real world. But is The Gentlemen based on a true story?

Even though The Gentlemen is Ritchie's most modern film in a few years, it doesn't appear to be based on any specific real-world story. In fact, it was loosely inspired by one of his earlier films.

"This is a return to my roots," Ritchie told Games Radar/Total Film, referencing Snatch. "It's on that frequency, but 20 years later. So everyone evolves – well, hopefully evolves."

The Gentlemen stars Matthew McConaughey as Mickey Pearson, an American business mogul who runs a successful marijuana empire in London. Pearson is looking to retire and cash out of the drug biz for good, and the possibility of inheriting his position triggers an avalanche of schemes, bribery, and blackmail from his fellow kingpins. The movie also stars Charlie Hunnam, Henry Golding, Michelle Dockery, Colin Farrell, and Hugh Grant.

From the look of the trailer, The Gentlemen appears to have Richie's signature British wit, blended with sleek action and stylish costumes. The cast, particularly Grant, seems to latch onto the funny, accent-heavy dialogue to create plenty of lighthearted moments. And Farrell, a Ritchie regular, plays a working-class Irishman who's sure to be a breakout character.

McConaughey —  starring as a well-dressed smooth-talker — was drawn to the role because of Ritchie's script. He told LA Magazine, "Like Lock, Stock and Two Smoking Barrels and Snatch, it's a gangsterish comedy with size and scope. Ritchie has a real identity with that type of film, and it's that type of script," McConaughey said.

With The Gentlemen, Ritchie revisits the type of movie that made him a famous director with a signature style. It's an original, fictional work right out of his own twisty, funny imagination. For the guy who came up with Snatch, Lock, Stock, and RocknRolla, we'd expect nothing less.