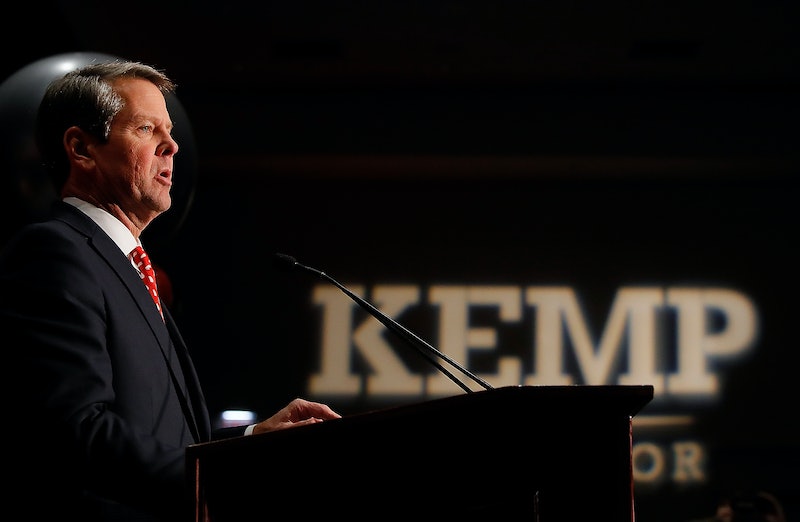 One week after Georgia's state senate passed an extremely restrictive anti-abortion bill, the state House followed suit by narrowly voting in favor of Georgia's "heartbeat" abortion ban. According to New York Magazine, Georgia Gov. Brian Kemp has pledged to sign the bill into law as soon as it reaches his desk.

Titled the LIFE Act, this legislation would make abortion illegal following the detection of a fetal heartbeat — which could be as early as six weeks into a pregnancy, before many people even know they're pregnant. Shortly after the Georgia House voted 92 to 78 to pass the bill, Kemp applauded lawmakers for supporting the six-week abortion ban.

"Georgia values life," Kemp tweeted on Friday. "We stand up for the innocent and speak for those who cannot speak for themselves. The legislature’s bold action reaffirms our priorities and who we are as a state. I thank these lawmakers for their leadership and applaud their undeniable courage."

The American Civil Liberties Union has pledged legal action to challenge Georgia's latest anti-abortion bill, and has demanded that Kemp not sign it.

“Governor Kemp, if you sign this abortion ban into law, we will sue and see you in court to fight this blatant attack on the rights and dignity of Georgia women and families,” the ACLU said in a statement, per ThinkProgress.

According to The Washington Post, the LIFE Act could become one of the most restrictive pieces of anti-abortion legislation in the country if it is signed into law, but it is not the first so-called "heartbeat bill" to be introduced this year. Georgia is one of at least 11 states that have introduced similar legislation, per the Post, with Texas and Florida being on that list as well.

But Georgia's new law wouldn't just ban abortion after six weeks. According to New York Magazine, it would also expand the definition of personhood to "include an unborn child," thereby providing protections to an embryo while placing pregnant people and health care providers at risk of prosecution if they pursue abortions following the detection of a fetal heartbeat.

Georgia had previously banned abortions past 20 weeks, the Associated Press reported, but Republican Rep. Ed Setzler — who introduced the LIFE Act — argued that the more restrictive six-week ban would be a "commonsense" measure to balance “the difficult circumstances women find themselves in with the basic right to life of a child.”

The GOP's ultimate goal with legislation like this, according to the Associated Press, is to challenge Roe v. Wade before the Supreme Court. But although Kemp is prepared to sign the LIFE Act into law, it is unlikely to go into effect immediately. In Mississippi and Kentucky, which both passed similar laws in the past month, six-week abortion bans have been difficult to enforce because they are likely to face severe legal challenges based on their lack of constitutionality.

Georgia's LIFE Act has drawn widespread opposition from across the country. On Friday, while Georgia lawmakers were preparing to vote, a group of women dressed as characters from The Handmaid's Tale protested the bill outside the Georgia Capitol. Meanwhile, in addition to the ACLU, the Medical Association of Georgia, the Georgia Academy of Family Physicians, and the Writers Guild of America have all denounced the bill.

More like this
How To Fight For Reproductive Rights, Based On How Much Time You Have
By Courtney Young
How 5 People Upended Their Lives To Fight For Abortion Rights
By Hannah Smothers
Boris Johnson’s Leadership Is In Question – Again
By Bustle UK
Here’s How Lizzo Is Supporting Abortion Rights After The Roe v. Wade Reversal
By Brad Witter
Get Even More From Bustle — Sign Up For The Newsletter