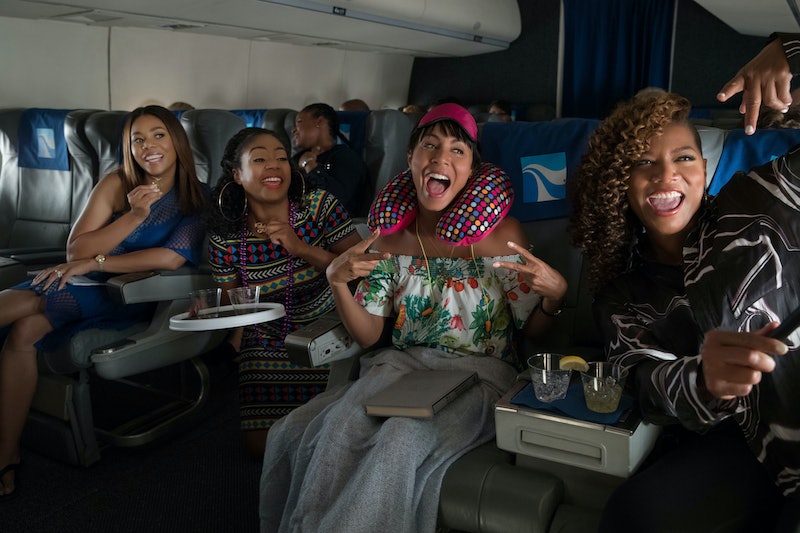 Black women don't get too many movies made about them in Hollywood, which is one of the reasons why I loved the box office hit Girls Trip so much. The comedy is full of the kind of joy and empowerment that Black women like myself have been craving since the release of Waiting to Exhale over 20 years ago. Yet the part of Girls Trip that stuck out the most to me wasn't exactly joyful; instead, it was a scene about Black colloquiums that I believe women from all races should not overlook.

Early on in Girls Trip, Regina Hall's character, Ryan, has a conversation with her White manager, Liz (Kate Walsh), about why Liz shouldn't use Black colloquialisms that she “probably looked up on UrbanDictionary.com” when they attend Essence Festival in New Orleans. Unsurprisingly, Liz doesn't quite get it, and continues to use the terms throughout the movie, which is typically met with awkward stares and dismissals from Black characters. Ryan's speech, though, is a moment for the books, and one that many people can, unfortunately, relate to.

Many Black women share the same lingo or terms of endearment towards each other to express the mood of a moment. "For real girl?!," "Oh no he didn't," "preach sista," "let 'em know," and a "mmmm hmmm" always set the tone for how to tell one of your Black aunties, mothers, sisters, or best friends how you feel about a particular situation. But hearing those terms come from a White woman (or a woman of any other race) and be used to address a Black woman is insulting. The White woman may think she's just fitting in with the crowd, but she's actually spewing casual racism by "acting Black."

Far too many non-Black women have said to me "girl" or "oh no he didn't" with a neck roll or waving finger, and it's highly irritating. This fake urban patois is trying to mimic what is perceived as "Black" or how Black women speak to each other, and it's straight-out cultural appropriation.

And besides, a Black woman’s demeanor and character is more than screaming “Yasss Queen” and "You tell 'em girl." It's offensive to Black women like myself when a White person automatically thinks that the only way they will be able to relate to me is by reverting to sassy posture and using "Black" slang that may have been looked up on the internet or perpetuated on reality television.

The Black community celebrates our colloquialisms, culture, and trends around the world, but let's not act like the urban mimic is OK — it is an expense of racism, and nothing else. Non-Black people using our lingo, especially when speaking to us, might believe it is fine to act on the stereotypical perceptions associated with a Black woman’s experience, but that's not true at all.

So I'm grateful for Girls Trip featuring a scene explaining just this, as it reflects the many complexities and challenges that come with being Black in America, especially being a Black woman. Thanks to Girls Trip, Black women can start some important conversations with our non-Black friends about the cultural appropriation we see occur in our lives all too often.