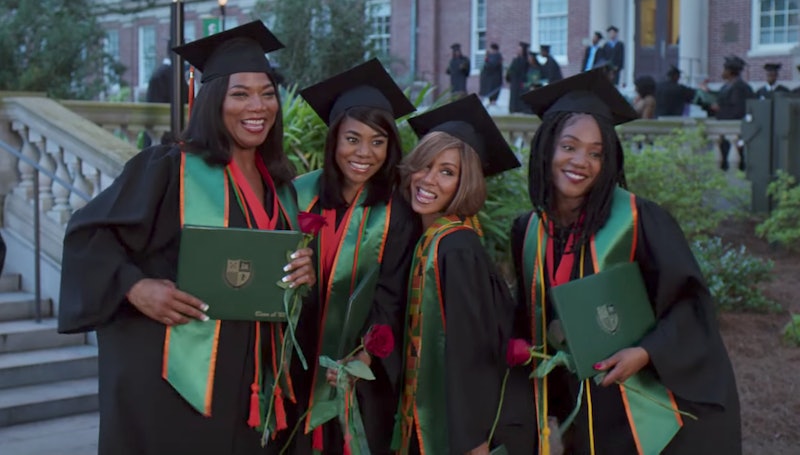 The Plastics showed us how not to be a good girl friend in Mean Girls, and now the Flossy Posse is here to show us what real sisterhood looks like in Girls Trip. In the movie, the group of four friends, played by Jada Pinkett Smith, Queen Latifah, Regina Hall, and Tiffany Haddish, go on a wild trip to New Orleans to reconnect after years spent apart. Having met in college, the women became best friends but eventually lost touch due to the extensive demands of adulthood. Once they get back together, they're back to their old wild behavior, which explains why they are called the Flossy Posse.

Merriam-Webster defines "flossy" as "stylish or glamorous especially at first impression." While those definitions are great, it's easier to look to rap music for examples of the words in use to get a better understanding of it. In Far East Movement's song, Flossy, My Name is Kay sings, "All eyes on me is how I feel, I'm flossy." And who can forget Fergie's iconic lyrics from Glamorous?

In the Fast lane, I won't change by the glamorous, oh the flossy, flossy.

Basically, the ladies of Girls Trip are G-L-A-M-O-R-O-U-S (yeah). And calling oneself that demonstrates an admirable level of confidence we could all take a lesson from.

The second part of the ladies' group name, "posse" is, you know, a group. The Rat Pack wouldn't be nearly as cool sounding if they were just "the rats," and the "posse" added to "flossy" similarly makes the Girls Trip friends sound cooler. One of the greatest parts of it being a group of women who announce their own "flossiness" is that not only are they showing their own confidence but also demonstrating that they are supportive of one another.

The rhyming part is totally cool, too. What a perfect name for the ladies at the center of Girls Trip.

More like this
All The Sneaky Lindsay Lohan Movie Easter Eggs In Her New Ad, Explained
By Stephanie Topacio Long
Kimberly J. Brown & Daniel Kountz Looked Back On Their ‘Halloweentown’ Romance
By Stephanie Topacio Long
The 'Hocus Pocus' Sequel Finally Has A Release Date & It Makes Total Sense
By Shannon Barbour and Radhika Menon
Everything To Know About 'My Big Fat Greek Wedding 3'
By Grace Wehniainen
Get Even More From Bustle — Sign Up For The Newsletter