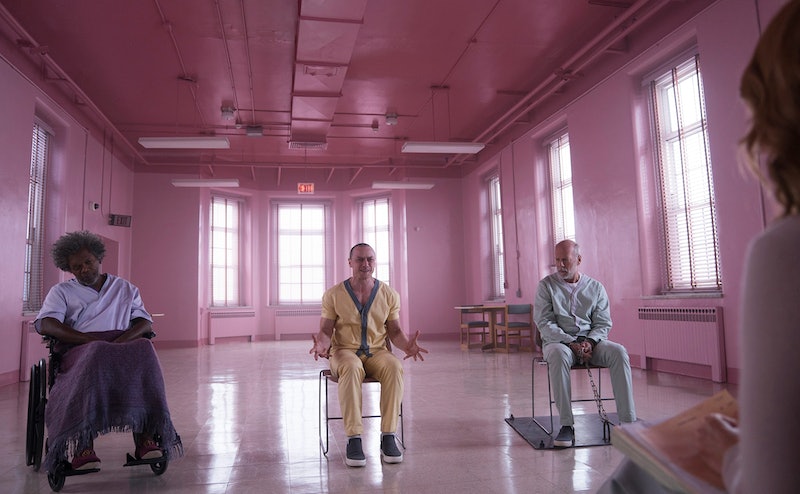 Look what you made Elijah do. The new Glass trailer shows what happens when the bad guys from M. Night Shyamalan's Split and Unbreakable team up. Safe to say, the results are nothing good, but the horror and drama should make fans excited for the long-awaited next chapter to Unbreakable, Shyamalan's beloved superhero epic before superhero movies were all the rage. From the looks of this clip, Glass is the ultimate thriller crossover event of the upcoming year.

Locked away in an institution, super human Elijah (Samuel L. Jackson), who fans first met in 2005's Unbreakable, is having a hard time. The genius villain is despondent. "Elijah has changed over the years," his mother says in the trailer. "He's given up." But he might just have a little more life in his heavily medicated body once he finds out about his fellow inmates. Also in the institution are his Unbreakable nemesis David Dunn (Bruce Willis) and Kevin, James McAvoy's character from 2016's Split, a man with dissociative identity disorder who had 23 different personalities, though he might have gained some more in his time away.

That beautiful mind of Elijah's has a plan to get out and it involves every one of Kevin's multiple personalities. Unfortunately, at least in the beginning of the trailer, those personalities are being controlled by Sarah Paulson's Dr. Ellie Staple, who has come up with a plan to "help" these three men who "are like something out of a comic book." Albeit a very dark one in which their powers often lead to destruction.

Throughout the trailer, McAvoy's Kevin turns into "The Beast," his super personality that can bend metal prison bars, scale walls, and run on all fours. Not to mention, break people's necks with way too much ease. He could also come in handy for Elijah's escape plan. "I need your abilities to get us all out of here and show the world we exist," Elijah says, before adding what fans might have all been thinking. "That sounds like the bad guys teaming up." Bingo.

This soft-boned genius might not understand what he's dong with this avenging angel who is hard to rein in. That's where David and his indestructible nature comes in, and that may just be what Elijah wants. "I've found someone who will require your full potential," Elijah says in the trailer. "You shouldn't be hiding in the shadows," adding, "Finally all of us together for the world to see what we are capable of." It sounds like Elijah's master plan is to release the Beast so that David will be forced to expose himself to the world, or at least, parts of it.

As the trailer continues, Elijah warns a lot of people will die, but David is hoping to put a stop to that. Once he puts back on his black poncho there's no turning back. But, is he too late? "What have you done Elijah?" Paulson's doctor says with such pain and worry that the final shot of the trailer will leave you wanting more.

Unfortunately, fans won't get it until Glass hits theaters on January 18, 2019. And while that may feel like an eternity away, keep in mind that it took over 15 years for this surprise crossover to make it to the big screen. Good things are coming, and there is still so much to learn about this Unbreakable and Split mash-up. Fans should be afraid, very afraid.