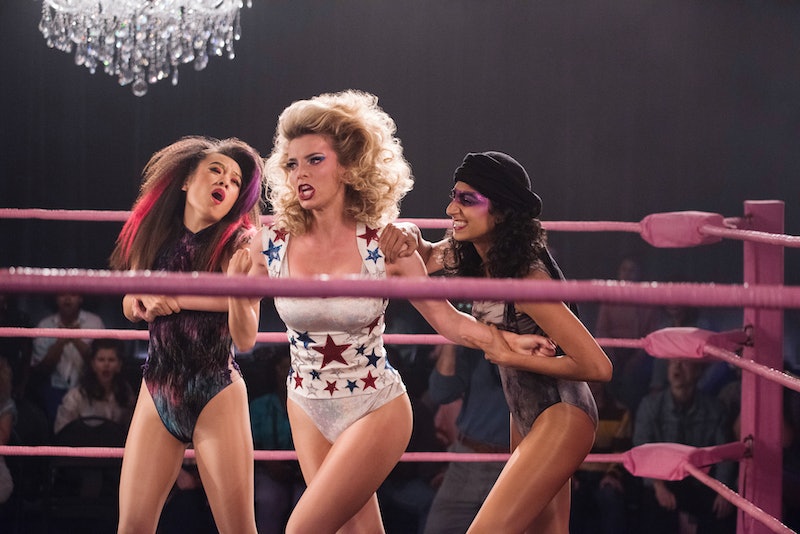 The second season of GLOW puts the titular Gorgeous Ladies of Wrestling in front of the camera to broadcast their wrestling prowess — as well as their musical abilities. Episode 8 of GLOW Season 2 takes the form of an episode-within-an-episode, giving audiences a firsthand look at what the Gorgeous Ladies Of Wrestling KDTV television show really looks like, and it turns out to involve a lot more than wrestling. Of all the episode's clever highlights, GLOW's kidnapping song lyrics may just take the cake.

Those who lived through the '80s likely remember that child abductions were the subject of a national panic in America. A PSA from the era featuring none other than McGruff The Crime Dog claims that 60 kids "disappear" each day, saying "some run away, but a lot are kidnapped by strangers, or even people they know." Paula Fass, author of the book Kidnapped: Child Abduction in America, told Newsweek that in the '70s and '80s "people were surrounded with what looked like demonstrations of the fact that children were disappearing ... Parents were taking out kidnap insurance. They were being advised by local police stations to have their children fingerprinted."

GLOW's kidnapping PSA combines the ever-present fear of kidnapping with the rise of advocacy songs like "We Are The World" and "Do They Know It's Christmas" to create a comedic portrait of '80s culture.

The PSA ties into the plot of the episode-within-the-episode, which follows Liberty Belle's quest to try to save her kidnapped daughter. Machu Picchu gets a bright idea for "how we can help" Liberty, and the scene cuts to a dramatic recording session where the GLOW ladies perform a tune about the true victims of kidnapping. In the first verse, Machu, Britannica, Melrose, and Yo-Yo take turns expressing their concerns.

Yesterday on the way home from school, a child disappeared. Why?

Stuff like this keeps happening. I think it's really weird

Don't these kidnappers know that kidnapping is wrong?

Don't they know they're makin' people sad? How long can this go on?

The four are joined by Liberty Belle for the chorus and are accompanied by Sheila the She-Wolf on piano — seemingly in the hopes that they can appeal to kidnappers' better natures through the power of music.

Kidnapping is wrong to do

Let the children run and play

And the one you've got, let them get away

Then go find something else to do

After the first chorus, Yo-Yo takes some time to bring attention to the real victim of kidnapping — her, specifically her cereal time.

Every time I get milk for my cereal, there's a face on the carton lookin' at me

Then, Liberty Belle explains what it's like to be the mother of a kidnap victim:

They're not just takin' children, they're breaking hearts and laws

That's why the buddy system is important

If you don't want to get 'napped.

When a strange man offers you candy.

It's probably a trap.

Finally, the rest of the GLOW cast joins in to repeat the chorus, reiterating that kidnapping is really, really uncool.

The episode features plenty of other nods to '80s culture, from the low-budget effects to a pop song about makeovers fronted by Melrose, featuring such choice lyrics as "Get that hairspray flowin'/Heavy on the mousse/Bustier on up, my friend/sequins and caboose." The episode also features commercials, including ads for sponsor Howard Foods and fellow KDTV show Quilting Bee Easy. However, there's no moment of the episode — or possibly the entire season — that encapsulates more about the '80s than the show's unforgettable kidnapping tune.