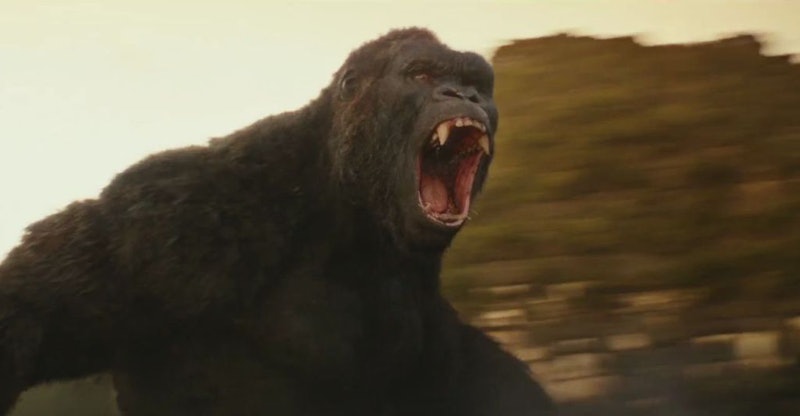 Of all the potential feuds brewing in Hollywood right now, the one that may be stoking the fandom fires with great fervor is the one between epic monsters King Kong and Godzilla. The planned Godzilla vs. Kong movie will leaves fans happy and satisfied as this fight has been brewing for literal years, even generations. While both monsters are venerated villains in their own right, their shared film which will see them facing off against one another and it could bode for big changes to the Legendary MonsterVerse. Fans will have to reportedly wait until 2020 for Godzilla vs. Kong, but in the meantime there's plenty of exciting images and plot possibilities that the title of the film and Legendary's statement on the future of the MonsterVerse that can keep minds reeling with curiosity.

We already know that Godzilla's future in the MonsterVerse is going to mean a major role. The scaly terror's existence in acknowledged in a post-credits scene in Kong: Skull Island. Godzilla's power and ferocity are hinted at, along with the existence of other kaiju, mythical monsters that ostensibly exist in the MonsterVerse too. Yet the intriguing future of Godzilla and the direction of his exploits is only made tantalizing by the fact that its history in film and with its fandom is long and storied. Seeing Godzilla take a step away from solo exploits towards battling Kong will mark the fulfillment of — no joke — a lifetime of hype-building.

Both Kong and Godzilla have been around for decades. Kong first appeared on film in 1933. Godzilla made his big screen debut in 1954. Since their respective debuts, Kong and Godzilla have starred in dozens of films collectively that have captured the hearts and minds of multiple generations of movie goers. These dastardly creatures, who wreak havoc wherever they go, have torn down cities, kidnapped beautiful blondes and held them hostage at the top of the Empire State Building, survived nuclear bomb tests, and yes, fought against those weakling humans for dominance over the land.

You don't mess with Godzilla or Kong, but how will they fare when fighting against one another? Where do humans figure into all of this? My guess is that these two creatures will not be settling whatever supposed beef they have calmly and rationally; cities (and maybe jungles) will be razed when Godzilla and Kong finally meet.

The next phase of the Godzilla franchise is already taking shape. With Godzilla: King of The Monsters set for 2019 and that title implying big things for the humongous lizard, it's fair to say that this installment in the MonsterVerse will set the tone for Godzilla vs. Kong. If, as the title implies, Godzilla is going to exert his dominance over all creatures in such a king-like manner, then that means by the time we get to the latter title, Kong will be itching to take Godzilla down a peg or two.

Godzilla vs. Kong is going to be an epic battle for the age. Let's keep our fingers crossed that the MonsterVerse does them both justice in the process.