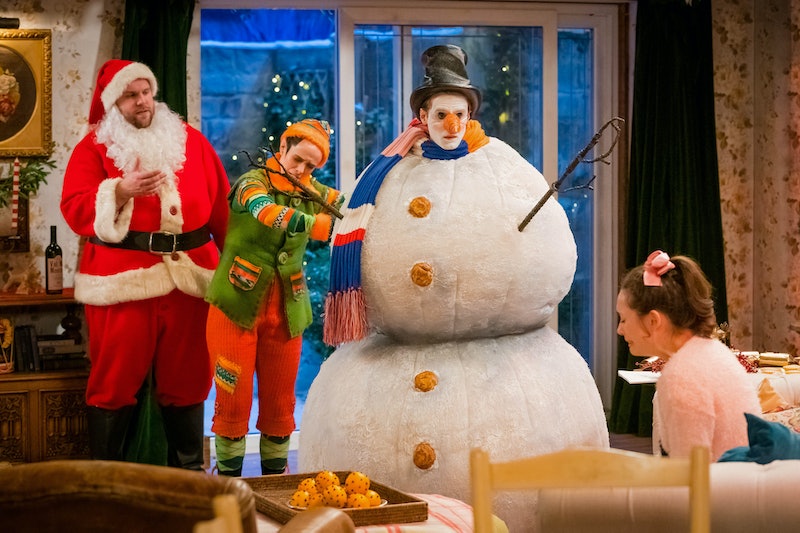 Is there anything funnier than a load of people falling over? I think not. And the BBC's new The Goes Wrong Show is all that and more. This comedy does exactly what is says on the tin; it's a show within a show where everything is a bit of a mess. Confused? Me too. Let's dig in.

The brand spanking new TV show is based on a play that has had huge success in London's West End, despite starting out as a small pub theatre performance. According to the BBC the franchise began seven years ago in a small north London pub with The Play That Goes Wrong. The original show was about a group of amateur actors attempting to stage a murder mystery. Since then, they've gone on to have hit spin off shows including The Comedy About A Bank Robbery, Magic Goes Wrong, and Peter Pan Goes Wrong.

The new series, written by and starring creators of the franchise, The Mischief Theatre, is made up of six episodes. Each is its own story and, in the spirit of Christmas, they're kicking off with a Christmas special on Dec. 23. And what's more Christmassy than a whole bunch of physical comedy and everything going a bit wrong?

Star Jonathan Sayer spoke to the BBC about his passion for classic comedies and comedians, saying: "I have really loved silent comedies since I was really young." He added, "I used to go to my grandparents' house and watch loads of Keaton and Chaplin and Laurel and Hardy and Morecambe and Wise."

All of this points to potential for a comedy that should be fun for every generation under your roof this Christmas.

The TV show has three female characters, which might sound like no biggie, but, according to Nancy Zamit, who performs with Mischief Theatre and will appear in the TV show, when the company began, it was a far more male dominated environment. She spoke to the BBC saying, "Finally we get to be front and centre and not have the male characters dominating." Zamit explains all the work that went into created well-rounded, hilarious female roles: "It's something we talked about quite a lot, trying to make sure that the female roles are diverse and varied. We even swapped a few punchlines around to make the female characters more active and engaged rather than passive."