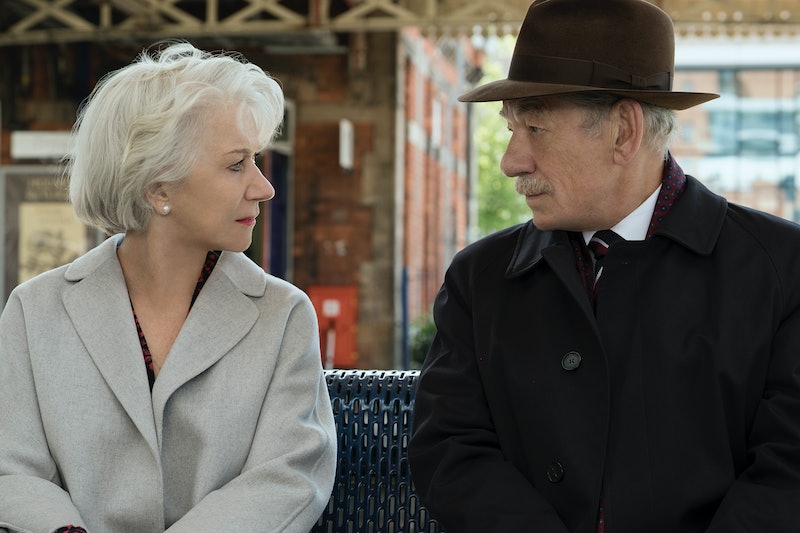 Hollywood is all about whatever is coming up next. Who's the next hot young actor? What's the next big franchise? Who will be the next version of [insert name of legendary star here]? But legends are legends for a reason, and sometimes it helps to get a reminder of that. Like the new film The Good Liar, out Nov. 15, which stars Helen Mirren and Ian McKellen. The thriller defies the industry's bias towards younger actors and therefore a nice change of pace, but where did the story of hidden identities and long cons come from? The Good Liar isn't a true story, rather, it's adapted from a novel.

The film is about a murderous con artist named Roy Courtnay (McKellen) who meets wealthy widow Betty McLeish (Mirren) online and sets her as his next mark. Courtnay's plan, per his usual M.O., is to seduce McLeish before taking her for all she's got — but there's more to this mark than meets the eye. The film's storyline certainly seems more in line with a paperback thriller novel than a true story, and there's a good reason for that. The Good Liar is not based on reality, but rather on the 2016 debut novel of the same name by author Nicholas Searle.

Although the novel is a wholly fictional story, its genesis actually came about due to a real event in Searle's life. An elderly female relative of his met a man on an online dating service who ended up being a con man, and who went on to serve as the initial inspiration to the character of Roy. "I came across a man who proved to be the model for Roy. The scenario with him is not dissimilar to what you see in the first chapter of The Good Liar," Searle told The Huffington Post in 2016. "A distant relative of mine met this man via an online dating service for elderly people. He charmed her very much, and moved in to her home by the time I met him. I was both fascinated and horrified by him because he was an inveterate liar, but was also a pretty poor liar, as well. Each of his lies was easily picked up and he was often inconsistent. I didn’t like him at all. That was the initial impetus for the book. The character Betty isn’t remotely based on my relative."

Despite the initial spark, however, Searle claimed that only the first chapter of his novel took inspiration from the real-life Roy, while he crafted the rest of the story on his own. "Aside from the core of the first chapter of the book, the rest of the plot and structure of the novel distilled in my imagination," the author told HuffPo. (If you've read it, you know it goes in a pretty shocking direction.)

As for other authors who influenced on Searle's writing, there are numerous. He listed 10 to HuffPo and nine to Reader Dad, but the two at the top of both lists are John le Carré and Graham Greene — two authors who are well-known for their espionage novels, a genre which bears some similarities to The Good Liar.

Since The Good Liar is not based on a true story, whatever familiarity the movie possesses is likely owed to its famous literary influences and, to Searle's family at least, the actual con man who helped spark its conception.

More like this
Gerard Butler Insisted On Adding This Pivotal Scene To 'Plane'
By Catharina Cheung
Jemima Khan Used Her Own Life As Inspo For 'What’s Love Got To Do With It?'
By Darshita Goyal
Here's How Netflix Should Adapt Prince Harry's Memoir Into A Movie
By Ginny Hogan
Pamela Anderson’s Dating & Marriage History Could Be Its Own TV Series
By Jake Viswanath
Get Even More From Bustle — Sign Up For The Newsletter
From hair trends to relationship advice, our daily newsletter has everything you need to sound like a person who’s on TikTok, even if you aren’t.