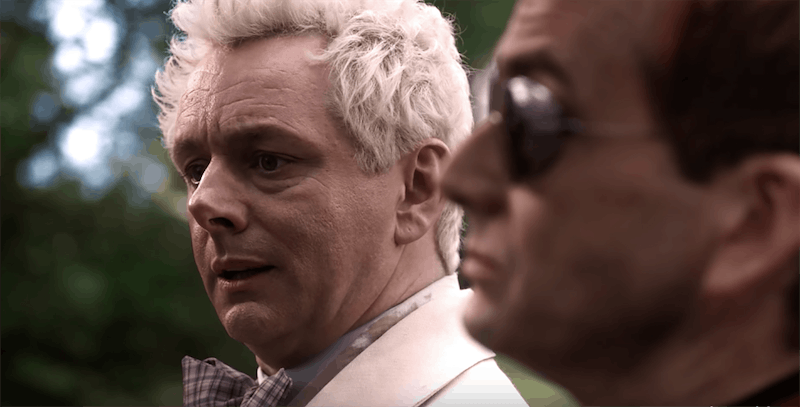 New York Comic-Con is the gift that keeps on giving. From celebrity appearances to Sabrina panels, there's nothing the convention can't give fans, including the first look at Good Omens. The Good Omens teaser trailer has arrived, and it has everything fans could want from the Neil Gaiman series: Angels! Demons! Good versus evil! Ominous religious imagery! Humor! Ridiculous wigs!

The dark comedy, adapted from the late Terry Pratchett's 1990 novel of the same name, stars Michael Sheen and eternal nerd husband David Tennant as an angel and a demon, respectively, who have maintained the unlikeliest of friendships for the last 6,000 years. The Good Omens trailer focuses specifically on this friendship between the two leads, and everything it's meant for both of them.

With the apocalypse on the horizon, the pair must find a way to work together and put a stop to the end of all things. Why, you might ask? Because Aziraphale (Sheen) and Crowley (Tennant) have not only bonded with each other over the course of history, but with all things Human as well. They'd rather not see the universe burn if it means losing what they love about eternal life on Earth. An angel and a demon teaming up to stop the apocalypse? Insert your own joke here.

Good Omens also stars Jon Hamm and Academy Award winner Frances McDormand, because it's making the hard sell to be everyone's favorite show. Yes, it's a vaguely religious, sci-fi, fantasy television show for Amazon Prime that's about an angel and a demon stopping the apocalypse, but it's about so much more than that! Is it? It's hard to say. Between Gaiman and Pratchett — who passed in 2015, about a year before Amazon picked up the novel for series — there's always much more going on than you'd see on the surface. Also a lot more Adult Content. (Remember American Gods Season 1?)

The first teaser trailer for Good Omens suggests the show will be as large and explosive, sometimes literally, as fans would expect. It's a show about immortal creatures trying to stop the end of the world, so how couldn't it be, really? Plus, as the flashbacks throughout their friendship continue, it means so many weird David Tennant looks. Like, so many. Dark glasses and crimson wigs and leather jackets, oh my! Sheen, meanwhile, looks like a college professor who was spooked by a ghost. Actually, he kind of looks like the 11th Doctor, too. Could that be an in-joke? Whovians can only hope.

The Good Omens series has been in development for a while. It was first announced in April 2016, when Amazon confirmed that Gaiman, who co-wrote the novel with the fantasy legend, would be adapting it for TV. By January 2017, Bustle called the forthcoming series "the apocalypse humor people need." With Frances McDormand voicing God, and Hamm as Gabriel, the archangel, by her side, it's undeniable that this is going to be a series to watch. A friendship between forces at odds with each other, and with humanity, and who have a mission to find the 11-year-old antichrist, of whom the pair have lost track? It's safe to say there won't be anything like this on TV — or streaming — ever again.