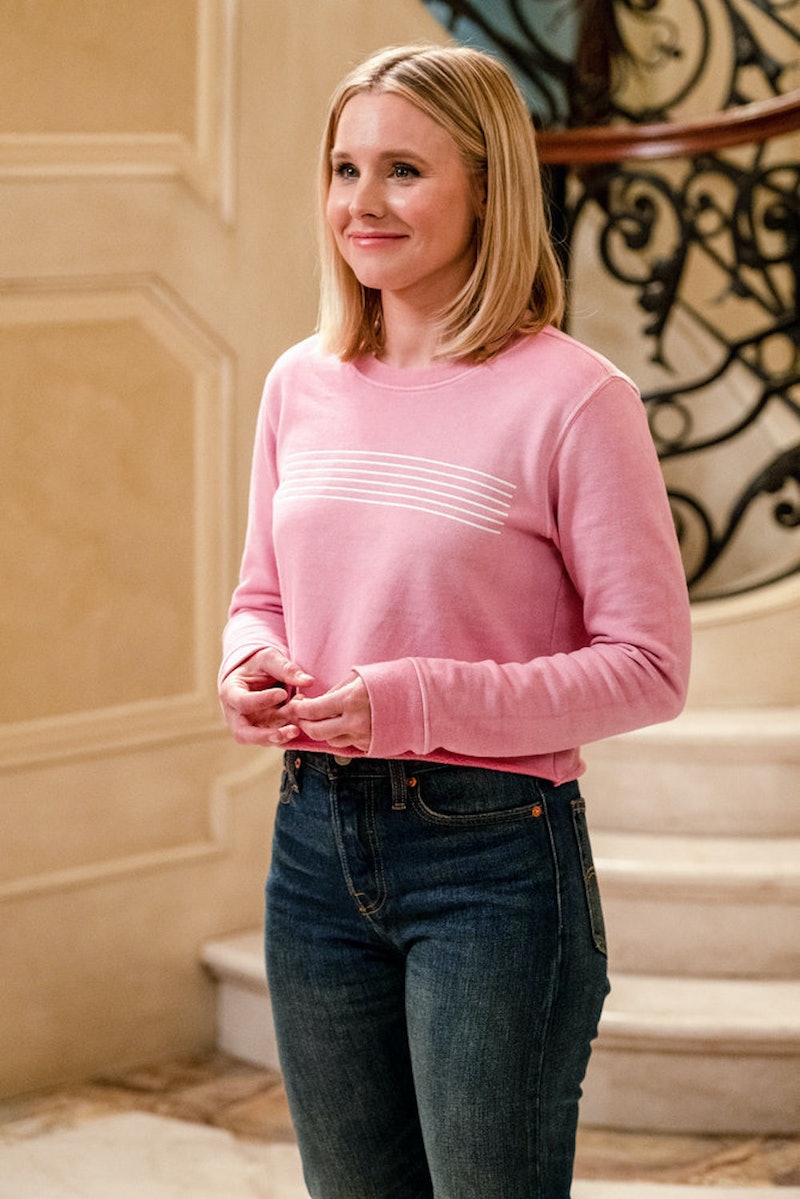 Spoilers for The Good Place Season 3, Episode 4 ahead. When The Good Place first started, there was no doubt that Eleanor was the worst person in the group of bad people who didn't belong in the Good Place. Tahani was self-centered, but giving. Chidi tried really hard to be good, even if he couldn't ever make a decision, and Jason was really just totally unaware of what was going on. He was too oblivious to really be bad on purpose. Meanwhile, Eleanor was basically downright evil. That's why it's so shocking that now, during Season 3 of The Good Place, Eleanor is being so good — for goodness sake. She's basically the show's greatest success story, and proof that you can learn to be a nicer person, even when you're doomed to be damned.

On Thursday's episode, Michael revealed what the Good Place is to the four humans, and, in doing so, compromised their ability to ever get in. Because they knew of the afterlife reward, their moral actions couldn't count anymore. Now, that predictably threw everyone in the group for a loop — but no one handled it better than Eleanor.

After finding out that nothing they did for the rest of their lives would matter for their own afterlife, everyone reacted in their uniquely them ways. Chidi had a full-scale meltdown about nihilism (the theory that nothing in life means anything) and basically started acting like old Eleanor. He mocked his students for being "nerds," stopped caring about societal rules, and generally didn't feel like doing anything productive.

Tahani reacted by seeking to give all her money away, which is nice in theory, but she's still acting good because she thinks she should, and giving money away is the only way she's ever known how to be a "nice" person. But as her original Bad Place designation showed, no matter how much charity you do on earth, it's your attitude that matters. She's still name-dropping like it's nobody's business and generally being uppity — even if accidentally so. And Jason is clueless, as always.

But Eleanor made real growth.

One could hardly blame Eleanor for initially wanting to revert back to her rude ways. Finding out you're going to the Bad Place when you die is a lot to swallow. But though Eleanor immediately hit up a bar, snapped at the bartender for a free drink, and generally started regressing to her old self, she also couldn't help herself from doing the right thing when she found someone's lost wallet. She went to steal the money, but something stopped her before she could put it in her pocket. Instead, she tracked the man down (through two address changes), and returned it.

Seeing how happy it made him made her want to keep doing good. She returned to the group to tell them that, while their own lives were beyond saving, they could start doing good for others to help them get into the Good Place. Everyone was on board, but the fact that it was Eleanor's idea shows how far she's come. She doesn't have to help anyone. It won't help her. There is no moral dessert anymore, and yet she's still being moral.

And that's how, in just two and a half seasons, Eleanor went from the worst of the worst, to the best — while everyone else stayed exactly where they were. Chidi is still tortured by every aspect of philosophy. Tahani is still conceited and vapid and obsessed with money — whether she's trying to get it or trying to give it away. Jason is still oblivious to pretty much everything. But Eleanor has elevated to true Good Place potential. Which means, unless the next few episodes change things, she could be the only one of the four who does get into the Good Place in the end.

If the judge finds out about Eleanor's idea to help people just for decency's sake, she could change her mind about Eleanor's eternal damnation. Her new actions are so good for no other reason than to help people that it should skyrocket her to the Good Place when she does die. But, even if it doesn't, that's not Eleanor's goal anyway. She truly just wants to be a kind, helpful person. And that's why she is truly, finally Good.