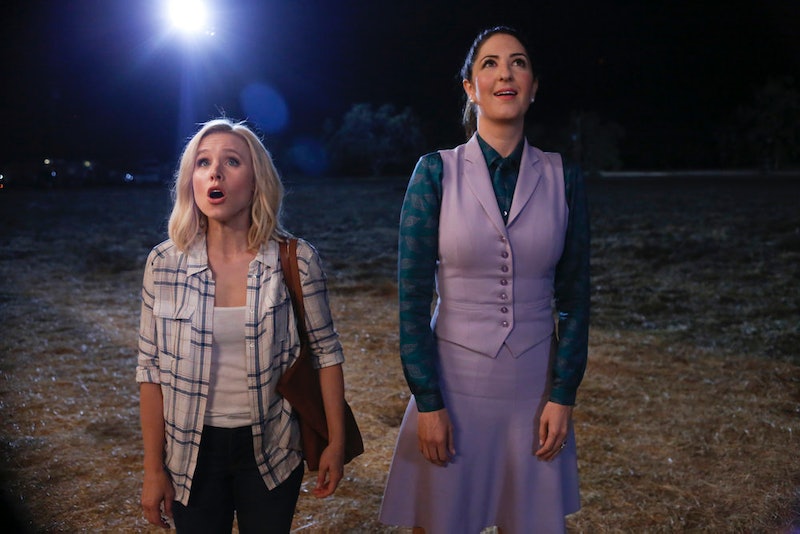 If you haven't made it to the end of The Good Place Season 1, stop reading right now and hit up Netflix. Because its first season finale completely exploded the comedy's unique universe, resetting the scene for a completely different Good Place in Season 2. (As it were.) Speaking over the phone, D'Arcy Carden, who plays the afterlife neighborhood's indomitable information system Janet, warns fans that the series is going to have a different tone and be even faster paced in its sophomore year — if that's even forking possible.

"Now this season, knowing where they are, [the show] takes on a whole new meaning," Carden says. "It’s like a little darker. I guess it’s a lot darker."

Though a rewatch reveals that there were clever hints sprinkled throughout the first season, it turns out that even a cynical 2017 audience can still be surprised by a well-planned plot reversal. ("Usually, everybody’s saying that they could guess [the twist], but [The Good Place] came as a real true shock to people," Carden says.) With one demonic laugh from Ted Danson's "angelic" Michael, The Good Place confirmed that Eleanor, Chidi, Jason, and Tahani had actually been sent to a particularly sunny version of Hades after their respective deaths. And though yes, they can each be self-absorbed, vain, and frustratingly indecisive, they're also not that different from you or me.

"If you guessed a million times, you couldn’t guess where Episode 3 goes."

"I don’t know if you felt this way, but when I found out the twist, I was sad," Carden remembers. "I was like, sad for these four people, because they’re not that bad, right? ... I remember when [creator Mike Schur] told us the twist, I just kept saying, 'Poor Chidi, poor Chidi.' He’s such a good dude. He means well."

And that's the subversive joy of The Good Place in a nutshell: it slyly undermines the black-or-white, right-or-wrong concept of a bifurcated afterlife by making you love these characters and then spilling the beans that, oops, that they're actually doomed to be tortured for all eternity. It's something as innocuous as frozen yogurt serving as a hallmark of hell. It's Carden's endlessly polite Janet chirping some disturbing truth. It's a heck of a heady premise for a half-hour network comedy, coming from a writer whose previous efforts (Parks & Recreation, Brooklyn Nine-Nine) are a little more accessible on paper.

"I think Mike Schur in particular was like, 'I’m gonna write what I would watch, what I would love,'" Carden says. "'I’m going to write what I think is funny and if others want to go alone with it, that’s great.'"

Others did go along with it. And though The Good Place didn't pull down any Emmy nominations this year (not even for 15-time nominee Danson, who Carden, incidentally, calls "the most down-to-earth human alive"), the show is beloved by critics and has grown a healthy fanbase. According to Carden, that's in part because the writing doesn't talk down to the audience.

"The writers are so fast and they trust the audience so much to be with them, to be as smart as they are, and Season 2 is no different," the actor promises. "In fact, it probably moves even quicker. Like, by Episode 3, you have no idea, if you guessed a million times, you couldn’t guess where Episode 3 goes."

It's The Good Place's unpredictability that makes the role of Janet, the show's de facto conscience, what Carden calls "the joy of my life." Michael's right-hand "woman" isn't human, angel, or demon, yet Carden owns some of the show's most uproariously funny moments, from the introduction of "Bad Janet" (Janet, essentially, if she were Sandy at the end of Grease) to her all-too-realistic pleading for her reprieve from Chidi and Eleanor's murder plot when they find her kill button on the beach. ("I have three beautiful children!")

"Every time I got a new script it was some new insane thing that I was allowed to do," Carden says. "I got to play all these kinds of different characters in one, throughout the season." When I ask her if the audience will be meeting any other versions of Janet in Season 2, she can't demure to the PR answer.

"Um, I know I should say 'just wait and see,' but the answer is yes," she confirms. "And maybe I’ll get in trouble for saying it, but I don’t care."

Some fans are probably hoping that Janet's arc this season — picking up after Michael wipes Eleanor, Chidi, Tahani, and Jason's memories and starts all over again with his great experiment — brings her back to her unexpected soulmate, Jason. (Can you have a soulmate if you don't have a soul? Discuss.) Their forbidden love and subsequent "wedding" was definitely one of the high points of Season 1, and Carden, for one, believe's that her operating system's "feelings" for the Florida slacker were some version of real, which bodes well for an eventual rekindling.

"They connect at this point, I guess, in Janet’s life — I’m saying 'life' in quotes — where Janet is learning things, and this is the only time where Jason could teach her anything," she says. "So they sort of bond in this moment of innocence, which is really sweet, right? They almost have this childlike love. There’s something super innocent about it, like teenage love. You know, she’s ride or die for Jason. I love it."

There's a lot of afterlife left to explore on The Good Place, and even D'Arcy Carden's personified Siri isn't immune to the spontaneous.

More like this
'That '90s Show' Star Callie Haverda Got Advice From Mila Kunis & Ashton Kutcher
By Brad Witter
At 28, Rosie Perez Risked Her Career To Stop Playing Stereotypes
By Gabrielle Bondi
At 28, Debra Jo Rupp Was Living A Much Different '70s Show
By Grace Wehniainen
Zach Reveals The Chaotic 30 Minutes That Were Cut From ‘The Bachelor’ Premiere
By Grace Wehniainen
Get Even More From Bustle — Sign Up For The Newsletter
From hair trends to relationship advice, our daily newsletter has everything you need to sound like a person who’s on TikTok, even if you aren’t.