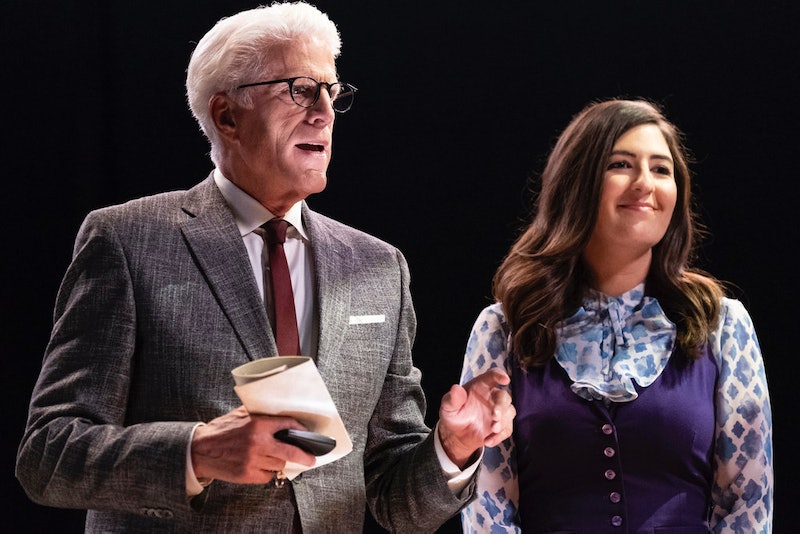 Spoilers for The Good Place Season 3 premiere ahead. It's been about eight months since audiences saw their favorite NBC foursome, but thankfully, The Good Place Season 3 premiere has picked up right where things left off. As fans will recall, Michael (Ted Danson) had convinced the judge (Maya Rudolph) to allow Eleanor et al to return to Earth for a do-over, rather than sending them to their own separate Medium Places. But while Michael is able to give them a second shot at becoming the good people he believe that he can be, his meddling, like much of the show, raises big questions about philosophy and fate.

It's clear by now that Michael cares deeply about these four humans, and make no mistake: They've made a lot of progress in the last year. But it soon becomes apparent that, unless they're all together, they'll fall back right back into old patterns. "I've left too much to chance," Michael tells Janet. "Until our group is back together again, this whole thing is hanging by a thread." But Janet, who has taken to calling the judge "mommy," warns that he's getting too involved. "If you keep disobeying mommy, something bad is going to happen," she says.

Michael, of course, ignores her and tricks the doorman into letting him return to Earth — several times, in fact. As audiences saw at the tail-end of Season 2, he appears to Eleanor as a bartender (clearly a reference to Danson's iconic role on Cheers) and plants the seed that leads her to Australia. Then, he tracks down Chidi, who has once again become paralyzed by his inability to make decisions. In the midst of one of his many existential crises, he runs into Michael — now masquerading as a librarian — who calms him down by telling him to help somebody else when he's feeling helpless. This advice comes into play when Eleanor, the self-ascribed garbage bag from Arizona, turns up in Chidi's office and asks him to teach her how to be good. The professor has a breakthrough and decides that his new thesis will focus on people who've had near-death experiences, studying whether they improved morally afterward. And it doesn't hurt that Simone (Kirby Howell-Baptiste), who runs the MRI machine he'll need to track their results, is really cute.

As for Tahani, Michael pretends to be an investor named Gordon Indigo, who not-so-subtly implies that her new devout, selfless persona is, to borrow phrase from the show, straight-up bullshirt. We later learn that he already emailed Chidi (under the choice pseudonym Charles Brainman) suggesting Tahani for the trial. So when the ethicist calls her, Tahani readily agrees.

Michael's final interference is with everyone's favorite Floridian, Jason Mendoza. After failing to win several dance competitions with his crew, Dance Dance Resolution, he's given up on his dream. Just then, international talent scout Zach Pizzazz (Michael in disguise) approaches him to join a dance crew in Australia. However, the Bortles-loving B-Boy turns down the generous offer. "My year started about a year ago," he says, explaining that he's had a pretty rough go of it recently. "I know this sounds crazy, but I'm starting to think there's more to life than amateur street dancing competitions," Jason says. However, Michael is able to convince him to go anyways, where some like-minded people are waiting for him.

It's unclear what would have happened if Michael hadn't stepped in, but Janet was right about one thing: something bad did happen. Not only does Shawn (Marc Evan Jackson) figure out what Michael is up to and send Trevor (Adam Scott) — one of The Bad Place's head honchos — to undo his progress, but his incessant meddling casts doubt upon the entire experiment. If, at the end of this, Eleanor and co. are able to become the people Michael so desperately wants them to be, is it because they were destined to do so, or is it more due to his divine intervention? And if he has to force it this much, can they ever really, truly, be good?

Perhaps Michael should have left the humans figure it out for themselves, or maybe it will all turn out all right. Either way, holy forking shirtballs! We're already off to an intriguing start.