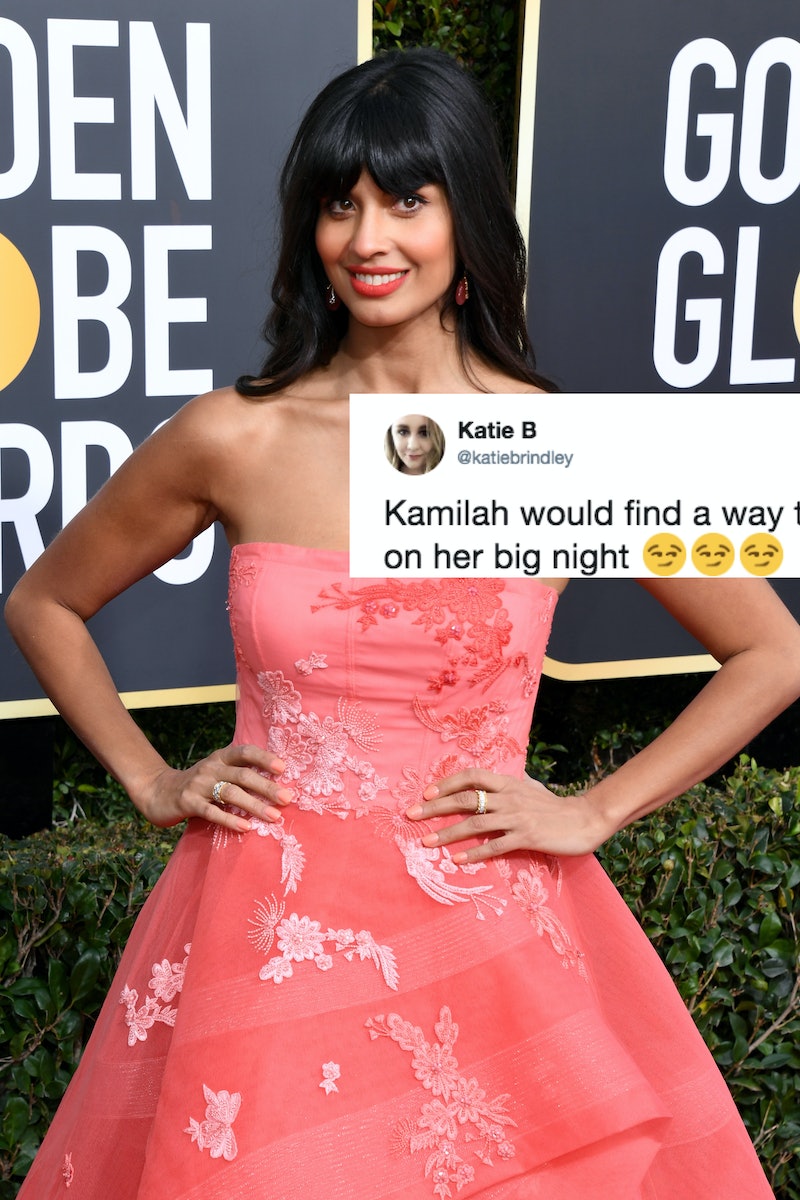 Tahani on The Good Place loves a good name drop, but E! dropped something else prior to the Golden Globes. Jameela Jamil was credited as her Good Place character's sister Kamilah Al-Jamil on the E! Red Carpet pre-show and fans are so confused as to whether or not it's a joke — because if so, it's a perfect joke. Was it a mistake? Was it intentional? Bustle has reached out for comment, but hasn't heard back as of publication time.

On The Good Place, Tahani Al-Jamil is constantly overshadowed by her famous, avant-garde sister Kamilah (Rebecca Hazlewood). Even in death, Tahani is haunted by Kamilah's shadow. So it's super funny, even darkly comic I would say, that E! showed footage of the IRL actor arriving on the Golden Globes red carpet with the lower third reading "Kamilah Al-Jamil" — which was a joke, right?

The actor Jamil even tweeted that she was coming to the Globes in her Tahani best, making it extra funny that this happened, by mistake or otherwise.

Here's what fans had to say:

It's honestly so much.

In a wrap-up towards the end of the carpet coverage, Nina Parker referred the goof, saying, “We know your name girl. It’s live, it happens!” So... does that mean it was a mistake? This is baffling. The true irony! Honestly, if someone did screw up that person should take it in stride and pretend it's what they meant to do all along. I totally give them permission.

Also important, though more practical and awe-inspiring than hilarious? Under the Tahani (not Kamilah) inspired gown, Jamil was wearing jeans! No matter what happened on the carpet, she's a hero — and will probably have something perfect to say in response to this maybe a joke, maybe too perfect to not be a joke, bizarre E! moment.

Later in the night, Jamil responded:

E live red carpet. This is legit the funniest thing I have ever seen. What a joyous mistake. Tahani would DIE! LOO LOL LOL. #witherTahani ? Hands down the greatest of red carpet jokes from whoever did this. It’s made my night.

It's such a mean thing to do to a fictional character. As many folks on Twitter noted, Tahani would be furious and devastated if this happened to her in her world. But boy is it a funny thing to do to fans. Unless, of course, it was actually a mistake. In which case... how dare you, and also, good job for the accidental subtle humor? Honestly, even Mike Shur and the The Good Place writing staff couldn't have written a twist this baffling.