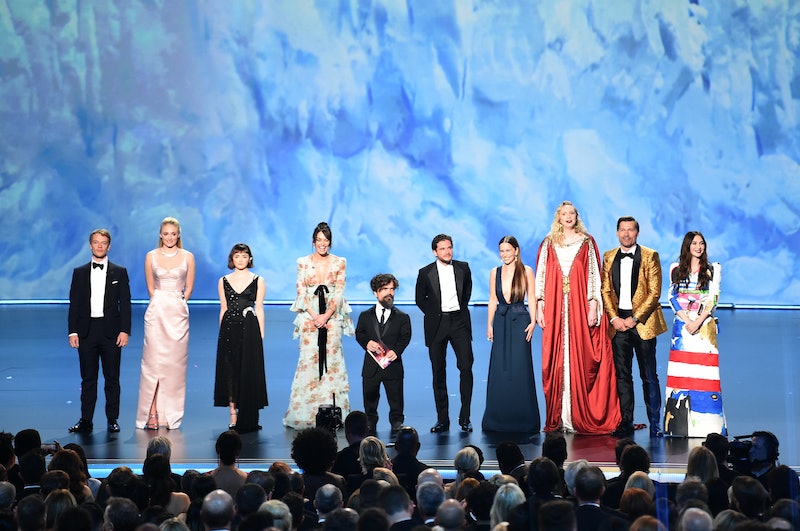 Before the Emmy Awards aired on Sunday, Sept. 22, Game of Thrones had already picked up nine Emmys at the previously awarded Creative Arts Emmys. But the Primetime Emmys were a bit of a different story, and in the end, and the Game of Thrones 2019 Emmy wins and losses reflected the uneven nature of the series' controversial final season. The HBO fantasy won a few major awards, including Outstanding Supporting Actor in a Drama for Peter Dinklage, but also lost a few, including Lead Actor in a Drama Series.

Game of Thrones' eighth and final season was both loved and hated by fans everywhere, so it's no wonder that its Emmy results were equally inconsistent. The HBO series was originally nominated for a stunning 32 Emmy awards, the most nominations any show has ever received in one year. According to People, Game of Thrones already had 260 Emmys to its name before this final season, so any wins are truly just the icing on top.

There were, of course, some expected, but still exciting, wins for Game of Thrones. Peter Dinklage, who starred as Tyrion Lannister, picked up his fourth Emmy for Outstanding Supporting Actor in a Drama Series — he's been nominated for all eight seasons. The show also picked up the Emmy for Best Drama, with trophies going to showrunners and creators David Benioff and D.B. Weiss.

And though winning Best Drama is certainly a deserving tribute to eight seasons of groundbreaking television, it's far from a sweep. Game of Thrones lost awards for Directing of a Drama Series, despite being nominated for three different episodes — "The Iron Throne" (Benioff and Weiss), "The Last of the Starks" (David Nutter), and "The Long Night" (Miguel Sapochnik). They also lost Best Writing for a Drama Series to fellow HBO drama Succession. But these loses, while somewhat odd for a show that would go on to win Best Drama, are not surprising.

Among the many complaints leveled at the final season of GoT, most were directed at the show's direction and writing. "The Long Night," for example, made headlines because fans complained that the episode was too dark to see anything. The backlash was so loud, the cinematographer had to respond. The writing on Game of Thrones' final season — and the direction of a few key female characters — was so unpopular among fans that hundreds of thousands signed a petition asking HBO to remake the season with better writing. Is it any surprise, then, that some Emmy voters would also share these complaints?

As for Game of Thrones' many acting loses, this could be a case of many good performances simply cancelling each other out in one category. Gwendoline Christie, Lena Headey, Maisie Williams, and Sophie Turner went head-to-head in the Supporting Actress in a Drama category, which could have split votes among the GoT family. Meanwhile, both Kit Harington and Emilia Clarke, who were nominated in the Lead categories, lost out to big fan favorites — Billy Porter for Pose and Jodie Comer for Killing Eve, respectfully.

As the New York Times noted last week, Game of Thrones remains the drama with the most Emmy wins in history. So, just like the show itself, GoT's Emmy legacy is both groundbreaking and disappointing.