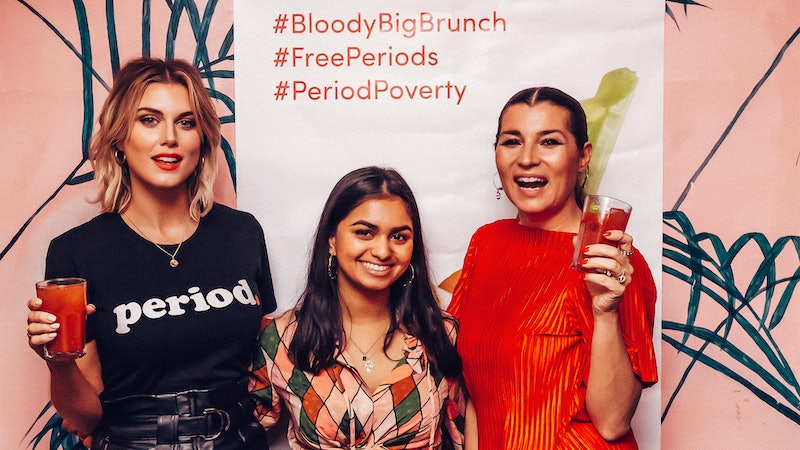 With International Women's Day on the horizon, gimmicky campaigns are beginning to see the light of day. Whether it's "female-friendly" pink beer or "feminist" products that do little to give back to the community, gender inequality is still being used as a marketing tactic. And according to some campaigners, the government's new pledge to end period poverty is airing too heavily on that side of the equation.

On Monday 5 March, Minister for Women and Equalities Penny Mordaunt announced that £2 million will be given to organisations working to end period poverty across the world. The government has also set aside a further £250,000 for an "advisory task force" to help find a sustainable solution to the problem here in the UK.

I know I'm not the only one whose immediate response was, "That's really not a lot of money," because several campaigners have voiced similar thoughts. "We need clarity on this. The task force reflects a disappointing lack of urgency," #FreePeriods founder Amika George tweeted.

Other voices in the charity sector were more positive. The Telegraph quoted WaterAid's global director of campaigns Savio Carvalho, who was supportive of the initiative, stating that "all women and girls everywhere have the right to manage their periods with dignity and good hygiene." Meanwhile, Farah Nazeer, deputy director of advocacy at ActionAid UK, reportedly called it a "step in the right direction."

However, Pam Scobbie, founder of the Bloody Big Brunch, echoed George's sentiment, writing in a statement: "There is no excuse not to act now. Working towards 2030 for an international solution means that another full generation of women and girls will continue to suffer period poverty in the UK, which is ridiculous." She told Metro that the government's announcement feels "tokenistic" and a "grand but empty gesture."

On Sunday, the Bloody Big Brunch invited thousands of people to show up to the main event in London or host their own at home. All guests had to do was pay using period products which will be donated to those in need. Although the event was successful, Scobbie says that "the last thing [she wants] is for this to become an annual event. We want to mobilise a solution quickly."

Recent research carried out by the Bloody Big Brunch charity revealed that more than a quarter of those surveyed had been unable to afford menstrual products with 26 percent of them missing school or work. A large majority (89 percent) of respondents also thought that giving free period products at school was just as or more important than giving out condoms.

"[Politicians] are continuing to ignore the severity of the issue on home turf and they’re overly complicating the solution," Scobbie continued in her statement. "The general attitude from government was clear when we launched our research; the Department for Education claimed that there was no evidence period poverty affects school attendance, which is complete nonsense." Bustle reached out to DFID to see if they had any comment on these criticisms, but did not receive a response.

Scobbie — and many other period poverty campaigners — believe that making sanitary towels, tampons, and the like freely available in schools, colleges, and universities would have been a much quicker and more effective step forward.

In 2018, Scotland became the first country in the world to offer free sanitary products to all students, states the Guardian. The Welsh government has also attempted to tackle the problem, reports the BBC, giving over £1 million to address period poverty last year and pledging to give £440,000 to local authorities until 2020 for the cause. However, the National Union of Students in Wales has called current measures "insufficient".

Ultimately, in my opinion, less talk, more action appears to be the way to effect real change. The ball's in your court, government.