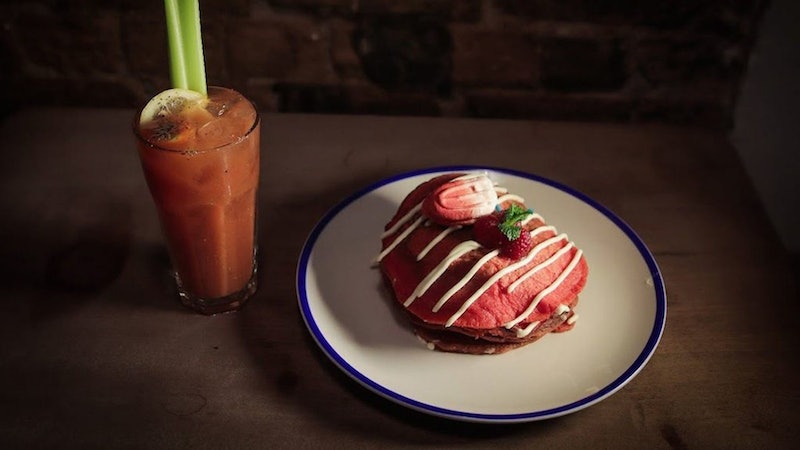 If you've been horrified at the UK's period poverty statistics and want to do something to help, you're in luck. The 2019 Bloody Big Brunch has been announced. The aim is to hold the biggest brunch the UK has ever seen while raising money for those people who are struggling to afford sanitary products.

This year's official Bloody Big Brunch will be held at The Book Club in London on March 3. The menu for the day will, of course, be period-themed, with red-velvet pancakes, tampon-shaped macaroons, and Bloody Marys on tap. Amika George — founder of the #FreePeriods movement — will be hosting the brunch with celebrity guests including Made in Chelsea's Jess Woodley and Celebs Go Dating's Tom Read Wilson. The day will also feature DJs and drag performances.

The Bloody Big Brunch charity decided to launch the event after conducting its own research to see just what society thinks about periods. According to the charity, the results "revealed that shame around menstruation is still widespread, with half of people currently describing periods as unpleasant or disgusting."

The survey also found that 69 percent of people (including boys and men) wished that society was more comfortable talking about periods. Meanwhile, research into the cost of period products revealed that almost 3 in 10 women and girls in the UK have been unable to afford pads, tampons, and the like. Just over a quarter of these respondents had missed school or work because of this.

In order to raise money for the period poverty cause, 15 percent of each dish sold during the brunch will go towards the charity. If you can't make it to the launch event, The Book Club will be serving the period-themed pancakes for an entire week from March 3 until March 10.

There's even a way to get involved at home. Bloody Big Brunch is encouraging everyone to host their very own brunches. You can download event invites, decorations, and recipe cards from the charity's website. All they ask in return is that your guests pay for their meals and drinks by bringing period products (pads, tampons, etc.). Specifically, period products sold by Hey Girls, a company that will double donations and send products to charities including Bloody Good Period, The Red Box Project, Girlguiding Scotland, Freedom4Girls, and YWCA.

In the last year alone, Bloody Big Brunch has managed to help over 5,000 people who were struggling to afford sanitary products. The aim of the upcoming brunch is to increase that figure to 10,000 and send a message to the government that legislation needs to be implemented.

Currently, period products are classed as a non-essential luxury item, which means they are taxed at 5 percent. According to Bloody Big Brunch's research, the average person will spend £4,800 on such products over the course of their lifetime. (This doesn't include the extra costs that come with having a period — like spare underwear, painkillers, etc.). As Grazia reports, a previous survey by VoucherCodesPro stated that this figure was £18,450. Either way, it's a hell of a lot of money — especially for those who have a lack of financial resources.

So, if you want to change the status quo, consider attending a Bloody Big Brunch this March or host one of your own.

The Bloody Big Brunch will take place at The Book Club on March 3 from 10 a.m. until 6 p.m. Visit the website to find out more.