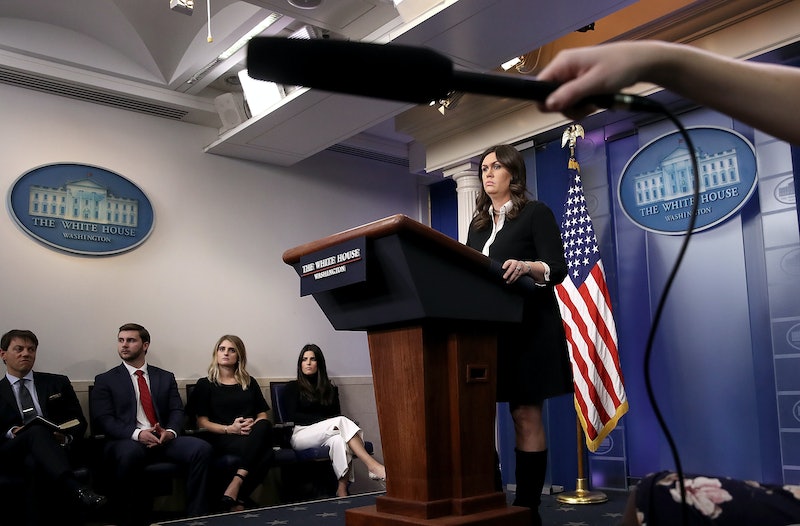 Amidst the U.S. government shutdown, reporters at a major multimedia organization are working without compensation. Notably, the government shutdown means Voice of America journalists are some of the many federal employees not receiving pay — and they're covering a topic that hits pretty close to home.

Voice of America (VOA) is an international multimedia agency funded by the U.S. Agency for Global Media, which used to be known as the Broadcasting Board of Governors, CNN reported. According to VOA's website, the organization first began broadcasting in 1942 as a means of countering Nazi propaganda during World War II.

CNN reported that, during the shutdown, employees who are considered essential for broadcasting at VOA, like editors, reporters, camera operators, and producers, must report to work without pay. "You can't stop broadcasting, so employees who are responsible for content are defined as emergency employees and have to get to work [without pay]," a VOA host told the outlet. Bustle reached out to VOA for comment on the matter but has not yet received a reply.

VOA's White House bureau chief Steve Herman spoke with CNN's Reliable Sources about the unique nature of covering the shutdown story when it impacts him on a personal level. Herman characterized the situation as "a bit unusual."

However, Herman also noted to Reliable Sources that, "Just like any other topic I would be covering, you put that [the personal nature] aside and you go ahead, you do your job."

VOA's employees are among the 800,000 federal workers not receiving a paycheck during the ongoing federal government shutdown, which began on Dec. 22, 2018. This federal government closure is now the longest one in American history, The Atlantic reported.

On Jan. 16, VOA featured an Associated Press piece profiling several federal employees about the financial hardships they are facing as a result of the shutdown. The piece emphasized that some federal employees are taking on second and third jobs to help cover their expenses as they wait for the shutdown to end.

For example, California-based Chris George, a forestry technician supervisor for the U.S. Department of Agriculture forest service, told the outlet that he's been taking on several odd jobs amidst the shutdown. George noted that he's been working for the ride-share company Lyft, though he has only been making around ten dollars for every hour of driving. He further reported that he's been working as a handyman as he waits for unemployment benefits to arrive. “I've just been doing side jobs when they come along,” George said to the AP. “I had two last week, and I don't know what this week's going to bring.”

In addition to pursuing other employment, federal employees are also using the internet to seek out support during the shutdown. CNN reported on Jan. 15 that over 1,500 funding campaigns have been established on GoFundMe to assist furloughed and unpaid federal workers. These campaigns have so far raised over $300,000.

Overall, as the shutdown continues with no end in sight thus far, many federal employees are doing what they can to get by as they await the government's reopening. For Voice of America's reporters and employees, there's also the additional challenge of covering a topic that is very much affecting their personal lives — something they are doing with aplomb and professionalism.