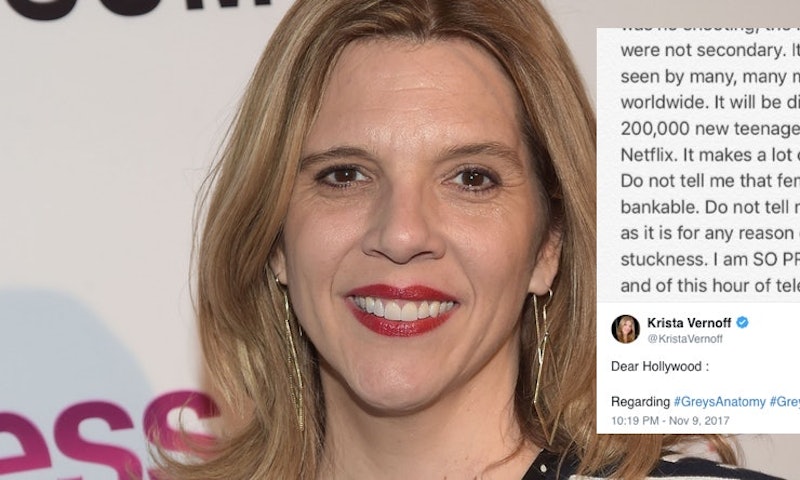 Understatement of the century: The entertainment industry can seem dismissive of female talent. So please put your hands together for the Grey's Anatomy showrunner, who used the 300th episode to send a message to Hollywood about exactly how valuable female representation can be for an audience. Krista Vernoff tweeted a screenshot of her Notes app in which she'd written an impassioned defense of female-heavy television. She broke down the 300th episode of her show, which wasn't just written, but also directed, created, line produced by women, and starred, "a whole lot of incredible women." Even its storylines didn't treat female characters as "secondary." And guess what? The show is a runaway success.

All of this may seem patently obvious. Why shouldn't a show featuring a lot of female talent be a success? Well, the statistics behind women in television tell a very different story, suggesting a potential lack of faith in women and female characters in entertainment. According to statistics released about the 2016-2017 season from the Center for the Study of Women in Television and Film, no progress has been made in hiring women for key behind-the-scenes roles, with the report noting that while 27 percent of "all creators, directors, writers, producers, executive producers, editors, and directors of photography working on broadcast network programs" were women, that this had figure had not grown from the 2015-2016 season and that this only marked a one percent increase since 2006-2007.

The same report suggested plenty of workplaces don't mind having departments entirely free of female representation. They cited how 75 percent "of programs considered" had no female editors while 67 percent had no female writers, amongst other statistics.

The point is, this representation behind the scenes? It has an impact on the number of fully fleshed out characters, the Kristina Yangs and Arizona Robbins, we get to see. Probably the most interesting aspect of the study was that it seemed to suggest that Grey's Anatomy isn't an anomaly in the way that its behind-the-scenes female talent ensured a better deal for the women characters, explaining that programs with at least one woman creator boasted 51 percent of their major characters being female "achieving parity with the percentage of girls and women in the U.S. population."

Vernoff's claims aren't unfounded — more women do seem to lead to success. Not just in terms of doing the decent, human thing and making art that genuinely reflects life, but in terms of viewing figures. In 2013, Broadcastingcable.com argued that female audiences are often the make-or-break factor for a show, explaining that Dancing With The Stars wasn't facing cancellation that year purely because its sheer number of female viewers were keeping it afloat in the attractive-to-advertisers 18-49 age range.

Similarly, Vegas — which the article claims was "the network's attempt to reach more men," and which had four main male leads to two female leads — had very low audience figures in both genders, probably explaining why it only aired for a year. It's not enough to just appeal to men, they argued, because "without a larger percentage of female viewers, a series is going to have trouble surviving its freshman season."

Reese Witherspoon backed this idea up in a September 2017 Glamour interview in which she argued that people wanted "to see dynamic women onscreen." She continued,

"Big Little Lies featured five actresses who were 25 to 50 years old, and 8.5 million people on average watched each episode. We had a pretty gender-balanced audience too, proving men are interested in women’s lives. "

But just as important than numbers, having female voices behind the camera leads to more nuanced female characters on the screen. Witherspoon was just as eloquent on this topic at the 2017 Emmys where she argued all four female characters had scored their actors Emmy nominations thanks to their in-depth development. She argued that they (presumably referring to herself and Nicole Kidman, who according to IMDb, both worked as executive producers on the show) had aimed to create "distinct roles that were all important, these women were all the heroes of their own stories, they were complicated, complex, they weren't good or bad, they were every color of the human experienc," and that this was why they had been recognized by the awards ceremony.

So no, Vernoff tipping her hat to the female characters and the women behind the scenes as the reason for Grey's Anatomy's success isn't just about a feminist supporting women. It's a savvy television creator recognizing how vital female representation is to success.