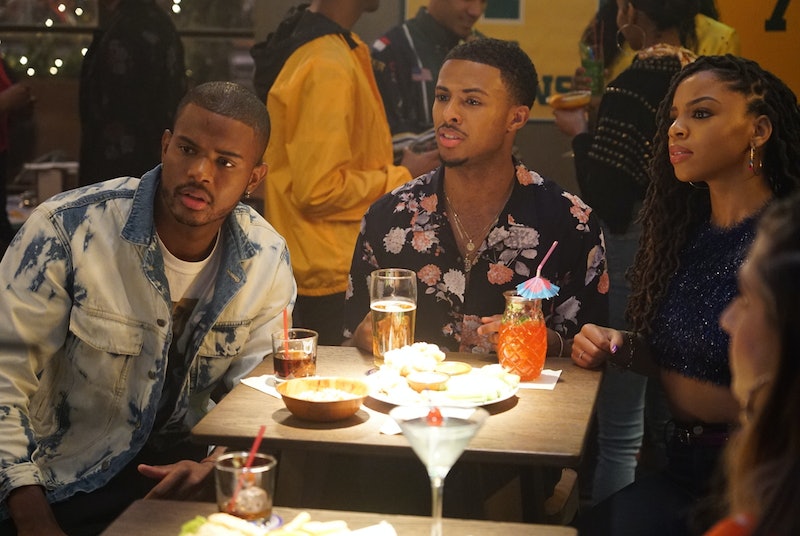 Just how fine is the line between appropriation and appreciation? The tricky grown-ish cultural appropriation debate from the Freeform series' July 10 episode, titled “Strictly 4 My …,” shows that lines can easily be blurred. And, as things tend to go on the show, everyone in the Cal U crew had their own unique — and super personal — take on the subject.

The conversation began when a classmate affectionately called Vivek the n-word — and Doug pointed out to Aaron that their friend may be getting "too comfortable" at Hawkins Hall. Aaron argued that it's not exactly Vivek's fault what someone else calls him. But Doug's issue was clearly more deep-seated, as he went so far as to contend that Vivek's behavior shows he's "appropriating our culture."

What exactly is cultural appropriation? Aaron had that explanation covered: "By definition, it means taking the elements of someone else's culture, not knowing anything about it or having any respect for it." His stance was that, especially given that Vivek himself is a minority, he couldn't possibly be guilty of appropriation.

Doug, however, was unconvinced, listing Vivek's perceived offenses: brushing his hair with a little wooden brush, using the Black thumbs up emoji (aka the "Wesley Snipes thumb," as he called it), and choosing a 2 Chainz lookalike video game avatar. His point was that, just because Vivek isn't white, it doesn't mean that he gets an "all-access pass," but should, instead stay in his lane.

"But how can you tell which lane is which, when everyone's trying to be us?" Aaron asked, suggesting a "limited access pass" is warranted. "Black culture is pop culture. It's not Vivek's fault the lines are so blurred."

After the women got pulled into the back and forth, Ana asserted that imitation is the highest form of flattery. Why doesn't that argument hold water here? Jazz gave her own enlightening breakdown:

"There is nothing flattering about picking and choosing elements of my life that you want to take: my body, my music, my hairstyles. All of a sudden, all these white girls are rocking cornrows and want to call them boxer braids and everyone's acting like they're making a brand new trend or something."

And, as Sky pointed out, they're "the ones who get penalized for it." The show displayed a made-up publication with the headline, "Twin Sisters Punished At Massachusetts School For Wearing Braids." The graphic may have been a fabrication, but that story is very real. In 2017, 15 year olds Deanna and Mya Cook received a “uniform infraction” for wearing long braids to school and were instructed to remove them at the risk of greater punishment.

Sometimes, even when someone believes they're educated on the matter, they could be very wrong. Enter Nomi, who's unwilling to excuse Vivek's behavior. "We have to stay woke," she preached to the group. "I mean, knowing the deep history of the fetishization of Black culture, and especially Black women, as an ally of the struggle, I find it deeply problematic to excuse Vivek's behavior."

Sky's response? "OK, Nomi, as an ally of the struggle, would you consider your own behavior problematic? Because I would," she said. "Some would say you're very similar to Vivek. I mean, you hang out with a mostly Black crew, you're rockin' bamboo earrings..."

Added Jazz, "And apparently now you give lectures to Black people on how to stay woke."

For her part, Ana believed that their focus on "trivial" things like cornrows and unlaced sneakers "minimized the culture." Aaron had a valid response: "It's not trivial to us at all because it's all we got. This is a culture we've been forced to create because the first one was robbed from us and now it feels like we're at risk of losing it again."

Ultimately, after some hurt feelings, Doug reconciled his views in a heart-to-heart with Vivek, whom he realized meant no harm. His point — with which Vivek agreed — was that, while Vivek is very much a part of their community, there are some things he should recognize need to be exclusive to the culture that created them.

Towing the line can be difficult, but, as grown-ish proved, a little bit of listening to someone else's perspective can go a long way.

More like this
Ozzie’s Coming Out Scene With Kitty On 'That ’90s Show' Has Twitter Sobbing
By Brad Witter
8 Things You Can Do To Appreciate Lunar New Year
By Elizabeth Tsung
The Plane Crash In 'Dear Edward' Is Based On A 2010 Tragedy
By Grace Wehniainen
'That '90s Show' Is Officially Coming Back For Season 2
By Gretchen Smail and Grace Wehniainen
Get Even More From Bustle — Sign Up For The Newsletter
From hair trends to relationship advice, our daily newsletter has everything you need to sound like a person who’s on TikTok, even if you aren’t.